Due to the nature of aerial adventure parks and zip lines, safety for workers and customers is of the utmost concern. The industry has used standards developed by organizations such as the Association for Challenge Course Technology (ACCT), the Society of Professional Rope Access Technicians (SPRAT), and the Professional Ropes Course Association (PRCA). These measures have been codified in the ANSI/ACCT 3-2016 and ANSI/PRCA 1.0-.3-2014 standards, among others, and there’s also the separate ASTM  F2959-14 standard. While state and local regulations vary, the industry as a whole largely follows one or the other of these standards.

On the other hand, existing OSHA laws, which have been highlighted recently in OSHA’s “Zip Line Employee Pamphlet,” apply uniformly to all work-at-height employees. OSHA laws aren’t optional—they’re laws.

Whether or not your jurisdiction requires adherence to a specific industry standard, park operators and staff should be educated on their particular course(s) and the standard to which it was built. To that end, there are a variety of third-party training and practitioner certification programs available, molded around current standards.

While the content for training and practitioner certification is often similar, there’s a big difference between receiving training and becoming certified.

Training programs typically cover a variety of topics, from basic safety and operations to maintenance and repairs. This training is usually tailored to a specific site, and the trainer has discretion to decide what to spend time on during the training. Participants in training programs often receive documentation of their attendance, but that does not mean that their skills have been tested to ensure they have mastered the training material.

Practitioner certification requires a greater commitment of time and money. It typically involves instruction, followed by a written test and/or a practical demonstration of skills. Those steps may include additional training and preparation. In addition, certification requires periodic renewal, often annually. All this comes at a cost.

At present, most park operators opt for training, and not certification, according to Joel McCombs, director of training and certification for Challenge Towers, an ACCT Professional Vendor Member (PVM) that offers both training and certification programs based on the ANSI/ACCT standard. But he says that training, by itself, is still a very good thing. Training is often tailored to a particular park or aspects of construction and operation, and that can be of great value.

“Accidents are almost always due to human failure,” he says. “It’s rarely equipment failure, and when it does involve equipment, it’s usually misuse. So, again, it really comes down to training.”

He cautions, though, that people often refer to their training documentation as a “certification.” It is not that at all.

With the likelihood of increased regulation in the future, there’s a growing consensus that park operators should invest more heavily in training, and even certification, for staff. This will not only help keep the industry one step ahead of future regulations, it also limits liability and helps keep everyone safer.

Here’s a look at some of the types of training and certification that are available. 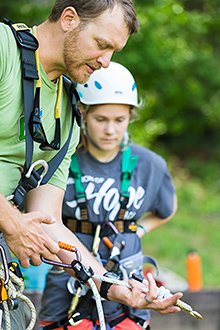 Becoming a PVM is no easy process. It takes 12 to 18 months to complete. In order to become accredited, a company’s business practices are scrutinized thoroughly. PVMs can become accredited to perform installation and inspection, training, and practitioner certification. There are currently 40 ACCT PVMs.

Each company’s knowledge, technique, and experience is different, and their respective approaches to training and certification reflect that. It’s important to ensure that a PVM’s expertise fits with your operation and course design, and what you want staff to gain from training. Keep in mind that many PVMs have a background in building traditional challenge courses, and the training they offer may be geared more toward experiential operations than pay-to-play parks and zip lines. If, for example, your jurisdiction has adopted ASTM 2959—which exempts educational and experiential programs—it’s important to work with a company that understands the ASTM regulations.

So how do training and certification work? We asked McCombs at Challenge Towers, North Carolina, to describe the process. Challenge Towers was among the first companies to be accredited by ACCT. Like many PVMs, it offers training, as well as practitioner certification courses, for park staff who perform various jobs, from inspection and operations, to administration and human resources.

For Site Specific Certification, Challenge Towers offers an on-site evaluation and develops a customized program specific to that park’s operation. Courses are very different, as are parks. Two levels are offered: Level 1, which applies to most day-to-day operational staff; and Level 2, which is considered “advanced expert” for higher level staff.

Full Certification, which is not as tailored to a specific course, is held at Challenge Towers’ own facility, and is broader and more conceptual. It covers general industry standards for employees that interact with customers and participants on a daily basis. Like Site Specific Certification, two levels are offered.

Course Manager Certification focuses on administrative duties as they pertain to the industry, from accounting to insurance regulations and human resources.

McCombs says often operators ask “how they can certify their staff as ‘certified trainers.’” Short answer: that’s not possible. “There is no such certification backed by ACCT at this time,” he says. “Conducting staff training is one thing. Certifying staff is another.” In cases such as this, McCombs refers managers to ACCT’s Qualified Course Professional guidelines for them to use as a metric in arguing if staff is qualified to conduct training.

As long as operators are clear about what they’re looking for, they can find a fair number of training facilities that offer a variety of different programs and practitioner certifications. With so many options, though, the question is: what’s right for each park?

“Get to know the company you’re bringing in and how well it matches your operation,” says McCombs. “While most vendors cover certain basics, some specialize or go more in-depth on certain aspects. Invest in on-site customized programs if possible. They can actually be more cost-effective.”

Several leading aerial and climbing safety equipment manufacturers, including Petzl, offer their own training programs. Petzl, for example, focuses on certifying individuals on the use of its equipment.

One of the largest providers of personal protective equipment (PPE) in the adventure park industry, Petzl is more broadly a leader in work-at-height industrial applications and emergency rescue. It conducts training and certification programs in its 15,000-square-foot state-of-the-art training facility in Salt Lake City.

At the heart of its training is the Petzl PPE Competent Person Certification, a program designed for professionals such as park staff and trainers, as well as third-party equipment inspectors. In the equipment-intensive aerial adventure park industry, that last part is pretty important when it comes to liability, says Petzl Technical Institute manager Jesse Williams. “It’s up to employers to qualify their employees,” says Williams. “Having an equipment inspection done by a Petzl-trained Competent Person has real value.” 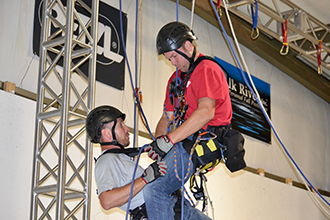 While most operations focus on equipment, procedures, and staff training aimed at safeguarding paying customers, some overlook their obligations to employees, according to Cliff Kirk, owner of Vertical Axcess in Knoxville, Tenn. Some may be violating OSHA rules, often without knowing it.

“The majority of [parks]do not comply with OSHA law. They don’t even think they have to follow it. There’s a mentality that adventure parks are ‘just recreational.’ Regardless, it’s still an employee working at height,” says Kirk. “Simply putting a harness on an employee doesn’t meet the requirements. It doesn’t matter what your job title is, or what industry you’re in, if you’re off the ground, you’ve got to comply with OSHA rules.”

To that end, ACCT offers a 10-hour OSHA course at its annual conference. Focused largely on fall protection as it applies to course construction and builders, operators are encouraged to attend as well, as the rules apply equally to aerial guides.

In the same vein, Vertical Axcess offers training and education, including Petzl and SPRAT certifications, with a focus on fall protection and equipment. That focus is applicable to everyone from engineers servicing wind towers to adventure park guides. All are subject to OSHA laws.

OSHA’s recently released zip line employee pamphlet is intended to inform aerial adventure park operators about their obligations and how to meet them. Any time an employer puts an employee in a hazardous situation (such as work at height), the employer must explain the hazard to the employee, give them tools and equipment to safely operate in that hazard, and the training and education to use the equipment.

Speaking of equipment: it’s important to obtain and outfit employees in proper equipment in the first place. When choosing gear for staff who work at height, especially harnesses, it’s imperative to check with the vendor to ensure that it complies with OSHA requirements. Many harnesses aimed at participants do not.

Kirk says that park operators sometimes hesitate to invest in training and/or certification for seasonal employees due to high turnover. While avoiding the initial investment is tempting, the ultimate cost isn’t worth the risk, he says, citing substantial OSHA fines and the possibility of litigation. “If someone gets hurt and you haven’t trained them, that’s negligence,” he says. 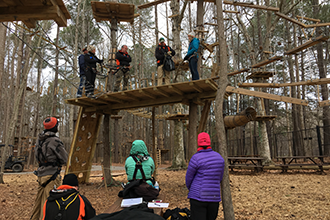 Beyond the standards and certifications of bodies like ACCT, PRCA, SPRAT and equipment manufacturers, there are other options available. One such option is the Aerial Adventure Academy, a non-profit built on the belief that there is a need for standardized operating procedures and best practices. The organization was founded in 2014 by leaders from Outdoor Ventures Group. This operator of a dozen parks across the U.S. saw a need to develop a forum to create consistency across all its parks, and offers its training services to all park operators for a nominal fee.

Achieving consistency is not easy. “We may have trained all the parks, but they had a tendency of ad-libbing and loosely interpreting the way they do things,” says Krotki of OV’s own parks. Creating the Academy “was a way to standardize operating procedures and best practices. The idea is to go from a park in Maryland to a park in Connecticut to a park in Michigan and know they all have the same standard of training,” he says.

The non-profit has worked with consultants out of Europe, where the adventure park industry has been around for a longer time, to create its curriculum and tailor it very specifically for parks. It has borrowed heavily from the European Ropes Course Association as well as largely adhering to ACCT standards (though it is not accredited).

AAA’s certifications fall into “Monitor” levels. Monitor 1 and Monitor 2 are the basic programs, with the former focusing on ground operations, the latter on aerial. A Monitor 3 course is available for advanced rope staff, and Monitor Trainer certification gives park staff skills and knowledge needed to conduct Monitor 1 and 2 training in-house.

Krotki adds that the goal for AAA—as with the industry as a whole—is to hold itself to a higher standard, and thus to reduce the chances for serious incidents in the industry. That will also protect the public image and reputation of aerial adventure courses. “If there’s an incident in the industry, it doesn’t just affect that one [operation], it affects all of us,” says Krotki.

Whether standards are self-imposed or handed down through government regulation, the value of training and practitioner certification programs is sure to grow.