You are at:Home»Park Briefs»Adventure Course Opens in Oman
By Sarah Borodaeff on August 7, 2018 Park Briefs 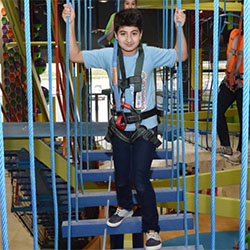 “The Sky Trail makes an immediate impact as customers walk into Trampo Extreme! Since we opened, it’s been one of our most popular attractions,” reported Trampo Extreme general manager Craig Ogilvie.

Trampo Extreme also has a Sky Trail course at its Murouj Mall Sports Facility in Sabhan, Kuwait, which opened in 2015. “We went with a double level Sky Trail and a 10m high Sky Rail, which has proven to be even more appealing than the single level one we installed at our Kuwait location in 2015,” Ogilvie continued.