You are at:Home»Park Briefs»Plans for a New Zip Line at Sleeping Giant
By Dave Meeker on November 20, 2015 Park Briefs 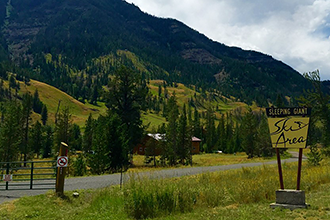 Sleeping Giant Ski Area in Cody, Wyo. will have a new zip line opening to the public on June 15, 2016.

The zip line, constructed by Skyline Adventures of Whistler, BC, was originally scheduled to open in late-summer 2015, however materials deliveries and weather caused the construction to fall behind schedule.

The seated zip line, part of a multi-activity development plan, was originally proposed under the Ski Area Recreational Opportunity Enhancement Act of 2011. This legislation allows for the year-round use of ski areas on land administered by the U.S. Forest Service.

After an initial inspection by the U.S. Forest Service, Sleeping Giant says test riders have left saying the views are spectacular and the zips exciting. In addition to the new zip line, a HeadRush QuickDrop has been installed off a 45-foot tower near the resort’s base lodge.

Tickets will be $69 per person.