You are at:Home»Park Briefs»In the Air at Sea
By Sarah Borodaeff on July 20, 2017 Park Briefs 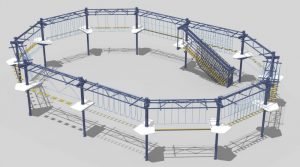 A rendering of the “Himalayan Bridge” aerial course.

The Sky Trail course, named “Himalayan Bridge,” consists of 12 poles and two linear paths of elements that can accommodate 30 participants at a time. The course is suspended over a portion of the Polar Aqua Park and rear sundeck. Participants work their way through the circular design 200 feet above the water, traversing 12 elements before making their way back to the starting point.

“We’re very excited to have played a part in such a magnificent ocean vessel. It’s a tremendous feeling to know Sky Trail ropes courses can deliver thrills to families across the world in a variety of environments, including the MSC Meraviglia,” said Marissa Ticknor, Ropes Courses, Inc., sales manager.

The Meraviglia will initially sail in the western Mediterranean with stops in France, Italy, Malta, and Spain, before embarking to parts of Northern Europe in 2018 and America in 2019.