Recreation, location, education and product. It’s these four building blocks that Massachusetts-based Feronia Forests relies on to propagate its Sustainable Full Forestry mission, which strives to make the greenest—and most lucrative—use of its 1,700-acre forest without cutting down a single tree.

The group behind Feronia Forests has, along with environmental specialists, developed a business model focused on sustainable managed forestry, which “puts trees to work” for both profit and education. Through its non-profit arm, Feronia Forward, Feronia Forests combines property-based ventures, including maple syrup products and an adventure park, with an educational program that educates folks, especially kids, about the importance of nature and environmental stewardship.

Ramblewild, the property’s new aerial adventure park, fills the recreation component. The park has operated with a barebones lodge since 2013, but opened in full this year, with all infrastructure in place and ready to handle large numbers.

Ramblewild is a money-making entity. It’s located in the Berkshires, a popular weekend and summer destination three hours from New York City, two-and-a-half from Boston, and two from Hartford, Conn. The park sells 3.5-hour climbing tickets to walk-ins or by reservation for $48 per person. 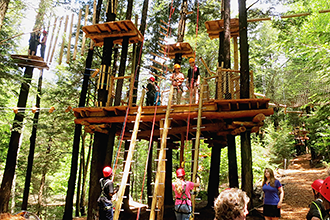 All of Ramblewild’s eight separate aerial courses spider web from one location called “The Hub.” They’re set up a lot like a ski area, says director of programs Luke Bloom, with designated routes for beginners, intermediates and experts. Each has about 15 platforms; strung between them are approximately 150 different climbing elements, as well as multiple zip lines on each course. 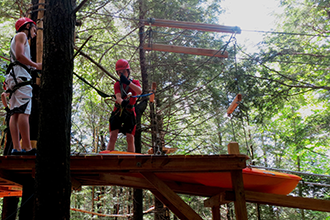 The park is built on a 10-acre hemlock growth. Two “campuses,” East and West, are separated by a 100-foot ravine, which is traversed by four zip lines, and by inventive, repurposed features like a Sky-ak (a kayak-cum-aerial park ride) and a horse saddle. There’s also a suspension bridge that links the two campuses, and all users must cross it to get back to the Hub once they’ve completed a course.

“The course designers did a good job using the topography of the land to create a dramatic effect,” says Bloom, “even on lower level courses that are only 20 to 25 feet high.”

Summer at the park is focused on the recreational component and pay-to-play users, but there’s a big jump in educational programming from Labor Day into December. This programming targets kids in local schools, starting as young as fourth grade. During this period, Ramblewild is vital to the park’s education programs.

The education component is key to the Feronia Forward mission; a goal of the group is to make responsible forest conservation more widespread. The non-profit works closely with schools, and brings many kids to Ramblewild via its scholarship fund. Bloom says the area receives a lot of calls from local schools that couldn’t afford to visit the adventure park for recreation, but who can visit in an educational capacity, thanks to the program. 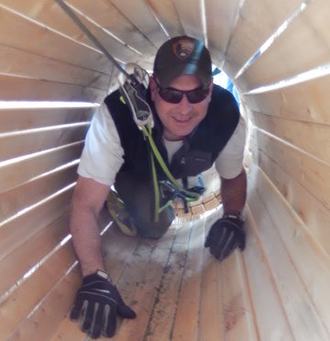 Once kids are there, the forest is put to work. “We use (Ramblewild) ultimately as a tool to help them immerse in nature and talk about some of the nature themes,” says Bloom. “The adventure park is a great way to grab their attention. Once we have the hook in, it’s easier to talk about trees and other things. Ultimately, it’s the biggest, coolest laboratory around.”

Bloom says that one goal of the Forward investors is social impact. “Part of that means educating youth about how to reasonably take care of these forests. If it doesn’t start with education, these forests will be gone.”

Ultimately, this is accomplished through the adventure park. “We introduce kids to nature and give an opportunity to put their phone down,” says Bloom. “This is partly why the park was built as an aerial park and not a canopy tour, so they’d swing around and feel connected to nature. Ultimately, the idea is that they understand that they’ll be stewards of this.”