You are at:Home»Magazine Archives»Fall 2017»For the Record
By Morgan Tilton on October 15, 2017 Fall 2017, Management, Operations, Technology

When Captain Zipline opened in 2004, it was the first zip line in the Centennial State, the third zip line in the U.S., and one of 25 aerial parks in the country. More than a decade later, the park has never experienced a major incident or accident, says owner and operator Monty Holmes. But it still maintains meticulous records of park activities, just in case.

To ensure every piece of equipment at Captain Zipline remains in working order, Holmes follows ACCT standards. In addition, the Colorado Department of Labor and Employment requires annual certification and proof of insurance, and Chaffee County requires an updated report for the site’s recreational permit.

It takes a regimen to meet the many requirements. A third-party vendor—California-based Challenge Works—provides an annual inspection. During the season, qualified managers inspect each of the nine courses first thing each morning. Each type of gear has different inspection intervals regarding certification, inspection, and life span, including the automatic belay devices, smart belay devices, clips, bolts, harnesses, helmets, gloves, ropes, and rescue equipment. And all those inspections get documented: what was checked, when it was checked, and by whom. This daily routine of inspections and recordkeeping helps identify issues, and helps prevent injuries to both guides and guests.

Holmes records all of the details via the old-school, traditional medium: paper. He keeps a detailed maintenance log, including daily, weekly, and monthly inspections. It’s quite specific. For example, it highlights details such as the condition of the wood logs on each feature of the aerial adventure course: are there hairy splinters? Do they need a pressure treatment?

Customers all sign waivers, of course, and these are attached to the day’s check sheet. Those stacks are organized by week, inside lidded plastic bins that are labeled by month, which are stored on shelves for seven years, as required by his insurance company.

In the shipping container, the plastic bins aren’t vulnerable to ultraviolet degradation or large temperature swings. “Paper lasts a long time and the bins are clear, so we can see the stacks of paper, and they do not have any visible degradation over the seven years,” says Holmes.

The Allure of Electronic Storage

Still, it’s a mountain of data. Holmes admits that documentation by way of paper files is not always the easiest or most functional avenue. “There are a few drawbacks to using paper, including the volumes of paperwork,” he says.

“I see the advantages of having an e-waiver,” Holmes admits. “We have 70,000 waivers in the shipping container as opposed to storing it on a single DVD. We have entertained scanning [both sides of]the waivers” so there are multiple copies, he says. Soon, things will different: Holmes plans to implement an e-waiver next year, and partner with Resmark Systems.

His online reservation system captures a lot of user information already, but evolving into a digital record system may not be as user-friendly for some of the guides.

For other well-established businesses that, like Captain Zipline, are rooted in a paper routine, the transition from paper to digital can be tough. However, integrating a faster, more efficient system can save both time and money, and it’s more environmentally friendly.

Plus, having easy-to-access, legible records can be extremely helpful in the event of a lawsuit. While lawsuits are infrequent, they can consume a great deal of a manager’s time, and are a source of nightmares for many operators. “It could take two years before the lawsuit is filed, so the guides’ or manager’s recollection of the incident won’t be good, or they might not even be employed there anymore, so the incident needs to be documented very well,” notes Granite Insurance business risk consultant Cameron Annas.

Various software companies have introduced products that help aerial adventure companies record data digitally. Information that’s stored via the cloud remains protected from being lost in a natural or human disaster, and it’s easily retrievable and sharable. “By far, the benefits of electronic records greatly outweigh the benefits of paper records,” says Annas.

1Risk, a data company that specializes in risk management, works with a dozen adventure parks that are located at ski resorts across the country. With 1Risk, aerial parks can create not only waivers, but also customized checklists for inspections, employee training, and also record incidents.

Once a waiver is created in the 1Risk system, it’s published and the text is preserved. “Five years after a waiver is created, if an incident or claim is filed, and an operation has to look up the waiver, it will have been preserved just as it was written five years ago,” explains business relationship director Charles Mickley. 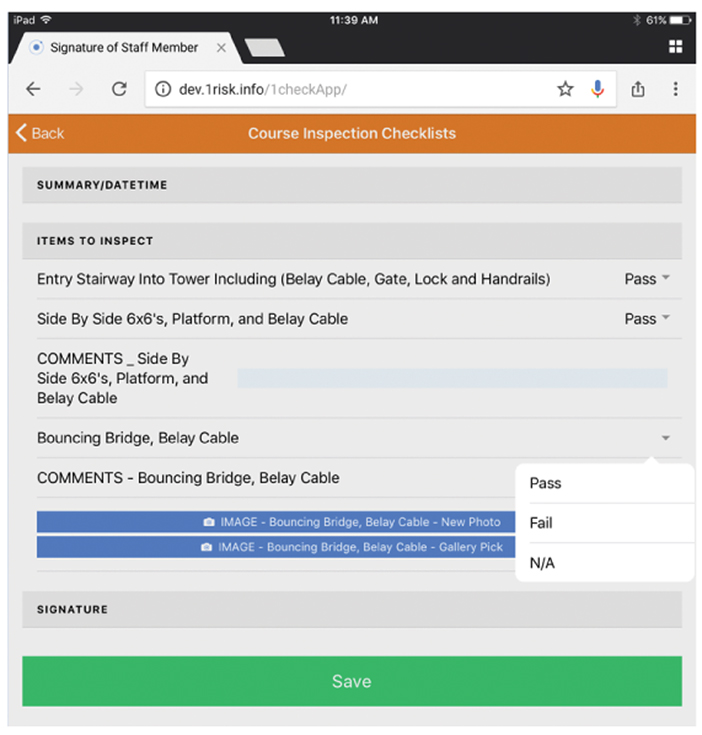 “When a guest or employee is injured, all of the facts are documented, including pictures and waivers, and brought into one system,” explains Mickley. “The file can be exported to PDFs and Excel, and sent to the insurance company or the attorneys that represent each operation, along with the photo logs.”

If an operation needs to update a waiver, it can copy and paste the text, update it, and save it as the new waiver, he notes.

WaiverFile, like some other suppliers, provides an electronic waiver form that allows customers to sign a user agreement from a computer or mobile device, either onsite or prior to arrival—and that can cut down on wait times as well as save paper. “Many big-volume companies—ones that go through tens of thousands of waivers a year—were filling storages with boxes and boxes of paper,” says WaiverFile CEO Mike McCloy, who founded the company in 2004. “When someone sued, which inevitably happens, and they had to find the paperwork, it was a nightmare. I’m a programmer, so it made sense to make a software to fix this problem.”

One company that helps operators implement digital documentation is Papertrail, which enables a business to create digital records for equipment, facilities, and training. Papertrail is used in a variety of adventure parks around the world, as well as High Trek Adventures, Wash., Nantahala Outdoor Center, N.C., and the Mount Hermon Conference Center in California.

Papertrail is a turn-key software solution on the cloud, so there is no need to install any storage hardware onsite. The digital program helps administrators record information more efficiently, such as daily inspection records, as well as minimize risk by ensuring inspection schedules are maintained and staff training is kept up to date. “A record can be customized to any type of asset or equipment, and we have standard templates for things like PPE equipment and adventure parks,” says CEO Ben Scholes.

The mobile app works offline, so records can be logged in the field and synced automatically upon returning to wi-fi.Papertrail can also integrate with other software solutions to create workflow—such as iAuditor, an audit template solution that can be saved into a Papertrail account. 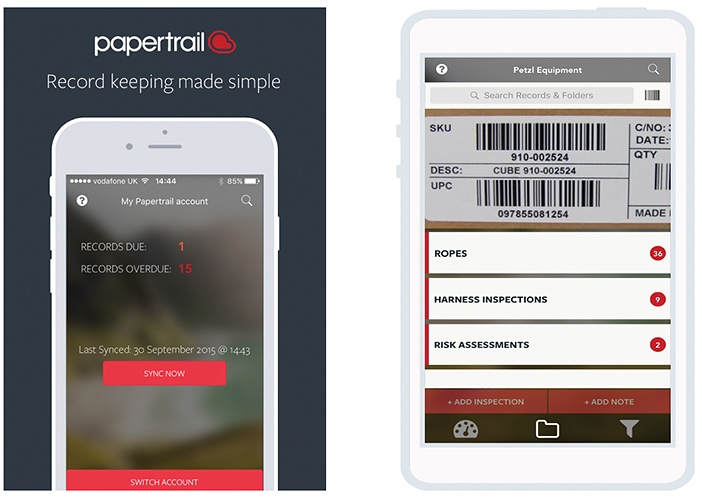 “We also provide an upload service, from a spreadsheet. We have also recently launched an integration with popular PPE manufacturers such as DMM, Petzl and Singing Rock, where you can search for equipment products and directly import as new records into your Papertrail account,” says Scholes.

Plus, data doesn’t disappear. “Data is stored for as long as you have an active subscription. You can access and export data at any time.” Scholes says records that get “archived” stay there forever in case an operator ever needs to access them.

Subscription prices vary, typically ranging between $15 and $95 a month, based on how many items are tracked and number of users who need access to the account. Papertrail also offers professional services, such as training, uploading, and simple customization of records. Contact the company’s U.S. partner, Aerial Adventure Tech, for specifics.

Another supplier, Mobile Inspection, builds customized checklists. Mobile Inspection works with nearly 70 parks across the country, and data collected through its program can integrate into most booking software systems.

“The real benefits and value in utilizing a digital software is the documentation,” says Mobile Inspection senior sales manager Anthony Howell. “As we saw this summer, across the country there were a number of fairs with people getting injured from the rides. One significant issue is that the paper documentation process failed in some instances.” A disorganized inspection form with notes scribbled in corners does not present well at the park or in court, and it may lead a manager to overlook a needed maintenance item. Digital records help avoid such issues.

In addition to identifying an issue and documenting it—like a loose board that gets looser and looser—the Mobile Inspection system automatically schedules a maintenance person to go out and fix the problem, and then that person signs off, too. 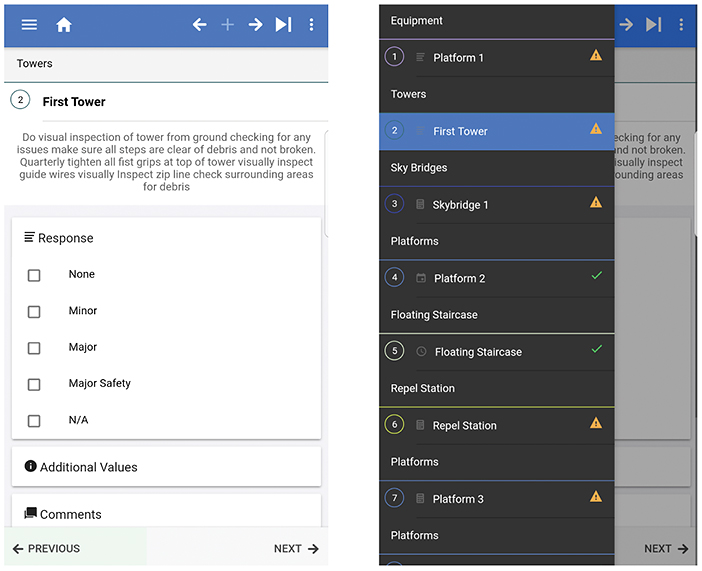 And it’s accessible. “With our system you can run a report to see over the last six months how many times, say, platform two was inspected, what issues were noted, and how they were corrected,” says Howell.

During a daily inspection, data entry is straightforward. A guide with a tablet or device inspects each element—such as a tower or swing—on the course. For each element, a specific list pops up to remind the inspector what to check, and they enter its condition. If there’s a maintenance issue, a photo can be added, as well as a comment.

The data is stored forever, and can be hosted on Mobile Inspection’s servers. Data can be accessed at anytime through the website. The service costs $100 per month. There is also a $500 setup fee that includes training on how to use the system, and how to create the inspection templates and an incident report form based on the park’s criteria. Parks can submit paper forms to be digitalized into the system, so that the digital format maintains a familiar flow and verbiage.

The end user generally can learn how to use the system in 30 minutes. In some cases, the learning curve can be faster.

Notes from the Field

One park that has adopted Mobile Inspection is Common Ground Canopy Tours in Oberlin, Ohio. “Setting it up is the most difficult part of it,” says Katie Hertzel, assistant manager. “I’m not very techie, so I needed help. But once it’s set up, all the guides know how to use it, and it took only a 15-minute training session to go over all of the sections that we have in the program.”

“One of the benefits is that if something needs to be fixed or adjusted, the guides can take pictures right there [with the tablet]and document an issue.”

Why go digital? Hertzel says, “It’s easier to communicate visually and with text than it is with pen and paper.”