Micah Henderson opened the annual meeting by declaring the ANSI/ACCT standard had been approved, which generated an enthusiastic round of applause. Henderson then reviewed business items from what was an overall tough year for the association, both financially and organizationally. Financially, the board is taking steps to improve the health of the association’s balance sheet.

Keynote speaker Pete Nelson of Treehouse Masters described the engineering and construction methods he uses to build his treehouse creations, and also touched on some of the ins and outs of his business ventures, including a treehouse hotel. The opening night “To the Trees” reception in the trade show hall continued Nelson’s themes, with nearly 100 exhibitors displaying their latest products and services. 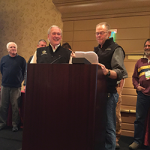 Jim Wall of Challenge Design Innovations is honored with the Critical Link Award. 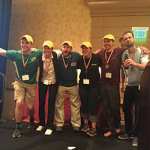 Sweet victory! Team Minion takes first place at the ACCT Olympics by showing off its proficiency in blind knot tying, lava walking, and ACCT trivia. Dozens of attendees participated in the annual event during the ACCT conference. 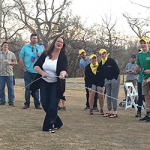 Michelle Cummings of Training Wheels shows off her skills in the cable whip competition during the ACCT Olympics. 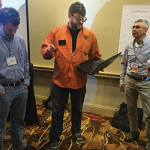 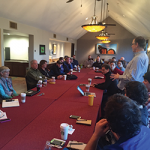 Members of the North Carolina Aerial Adventure Course Association gather for a meeting on Saturday of the ACCT annual conference. 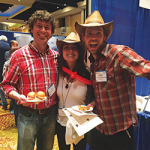 At the ACCT Hoedown, Adventure Park Insider senior editor Dave Meeker (left) was wishing he had a cowboy hat like Kolbi Lloyd and Jason Asher from Tree to Tree Adventure Park, Gaston, Ore.

Attendees flocked to pre-conference workshops on Thursday, with many more joining in Friday and Saturday—presenters often played to standing-room crowds and attendees often encountered rooms with a sign saying “Full.” Risk management was a huge focus of the workshops, with sessions on high ropes rescue; the good, bad and downright ugly side of inspections; and liability responsibility. Staff training and operator issues were also common themes.

The recent ANSI approval of the ACCT 9th Edition Standards, officially known as ANSI/ACCT 03-2016, was another frequent topic. Several workshops covered the education and implementation of the new standard and offered operators the opportunity to comment on it.

In one session, the audience formed groups to discuss the interpretation of various sections. One group debated full body harnesses and the rationale for and against, the location of the connections (sternal, dorsal and waist), and what data exists on the proper fit of seat harnesses and the risks involved. Another group talked about “connection points” with the customer, including supervision levels versus difficulty of the connection type, and the training levels (of the customer) compared to supervision levels (size versus age, reach, and dexterity).

No conference in Texas is complete without a hoedown, and ACCT did not disappoint. It laid the groundwork for exhibitors and attendees to enjoy a Friday night awash with cowboy hats, (some) chaps, and cowboy boots—complete with live country music—in the exhibit hall. Revelers followed that by heading into downtown Austin to sample the live music capital of the world.

Michelle Cummings made a valiant effort in the cable whip in the ACCT Olympics, but the trophy nonetheless went to Team Minion for its proficiency in blind knot tying, lava walking, and ACCT trivia.

States across the country are taking steps to regulate the zip line and aerial challenge course industry. With the introduction of the new American National Standard (ANS) ANSI/ACCT 03-2016, many states are looking to the various industry standards to guide their regulation process.

In Kentucky, the House has passed a bill allowing recreational zip lines to be regulated and requires the state to set standards for the use and operation of aerial recreational facilities. If it passes the Senate, the Kentucky Department of Agriculture would be responsible for setting standards and regulating such operations under House Bill 38.

In Tennessee, where zip lines and aerial trekking courses are required to undergo annual inspections, PRCA and ACCT officials have both held meetings with the Tennessee Elevator & Amusement Device Safety Board to discuss additional standards/guidelines not currently outlined in the Amusement Device rules.

In December, Mike Barker, VP of the board of directors for the Professional Ropes Course Association (PRCA), was invited to present the ANSI/PRCA 1.0-.3-2014 standard, emphasizing the difference between the new ANSI/PRCA and other standards. Bill Weaver, director of operations for the Association of Challenge Course Technology (ACCT), then presented the ANSI/ACCT 03-2016 in March.

(For a discussion on the differences between the ANSI/ACCT 03-2016 and ANSI/PRCA 1.0-.3-2014, see the Letter from the Editors, from the Winter issue of Adventure Park Insider, at adventureparkinsider.com/letter-from-the-editors.)

In North Carolina, the Department of Labor has taken a different approach: it released a report dismissing the need for the state to regulate zip lines. The report, prepared in response to a legislative request following a fatal accident in 2015, compared aerial parks and zip lines to other sports where risk will always be involved, and said that additional regulation will not make them any safer. The Labor report recommended that lawmakers suggest engineers approve all zip line design and construction. The legislature responded by organizing a committee to look at zip line and adventure course operations, focusing on equipment and staff training.

Black Diamond Equipment, Ltd, in cooperation with the U.S. Consumer Product Safety Commission (CPSC), voluntarily issued a recall of carabiners, quickdraws, and nylon runners because of possible product irregularities. The recall is subject to user inspection.

A small number of nylon runners were found to contain a tape slice, resulting in a product that is not loadbearing and will fail under standard use.

No accidents have been reported, but users are asked to inspect their equipment and return products in question to Black Diamond for a replacement.

NASA Zips Into the Future 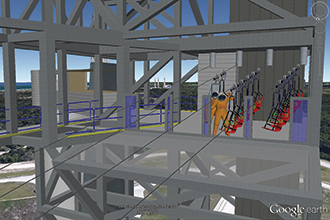 In the event of a last-minute emergency, a customized ZipRider system will allow astronauts to evacuate the launch platform in less than 60 seconds and reach a protected zone where armored vehicles await.

With the impending return of manned space flight in the U.S., perhaps as early as next year, NASA needed a suitable means of last-minute, pre-launch emergency escape for its astronauts. And the best means of escape it found is, basically, a ZipRider. 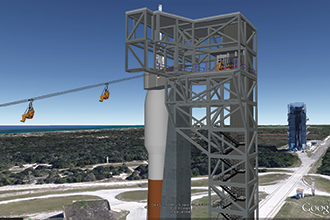 he zip lines start 120 feet up the crew access tower and run 900 feet to the protected zone. Each of the four lines can accommodate five riders at a time, thanks to ZipRider’s dynamic braking technology.

Initially, NASA tried to adapt its older escape baskets, last used on Space Shuttle launches, to the smaller, shorter crew access towers (CAT) of the new launch program. When that didn’t work, NASA put out an RFP to a variety of companies that already had developed the necessary technology and proven it in a commercial setting. From a wide range of competitors, ZipRider won the bid.

The unique requirements of the escape system include the evacuation of 20 people, in bulky space suits, in 60 seconds or less. The evacuees must be able to reach the protection of a “blast shield” where they enter an MRAP escape vehicle (armored transports also used to withstand roadside IED explosions) that speeds them two miles from the launchpad to a designated safe zone.

For Eric Cylvick and the crew at ZipRider, the solution was four 900-foot zip lines from the 120-foot level of the CAT, with five ZipRider trolleys mounted on each line, equipped with custom seats and harnesses. Evacuees simply grab the nearest available trolley, take a seat, and launch. The dynamic braking technology on the ZipRider trolleys allows individuals to control their speed and stop precisely at the blast shield.

“The unique feature is to have five people on the line at one time, and the ZipRider braking technology allows that,” Cylvick says. “Astronauts can launch at the same time, or at any interval. The system is designed to get people down and off the line, behind the blast shield, in 35 seconds.”

With practice, riders should be able to stop at the blast shield and not engage the backup terminal brake. At press time, astronauts were scheduled to get a first taste of the system on Mar. 22 at ZipRider’s Utah headquarters.

The roll-out detachment of lanyards in the last year resulted in two serious injuries and possibly one fatality on challenge courses and aerial adventure parks, according to PRCA. These incidents are a reminder to avoid using equipment not suited to the task at hand. The detachments were related to the use of single stage auto-lock (twist lock) carabiners. These have long been recognized as inappropriate for use in life-support situations in commercial operations; several standards prohibit their use. When replacing gear or components in a pinch, make sure you are not creating an unsafe situation. 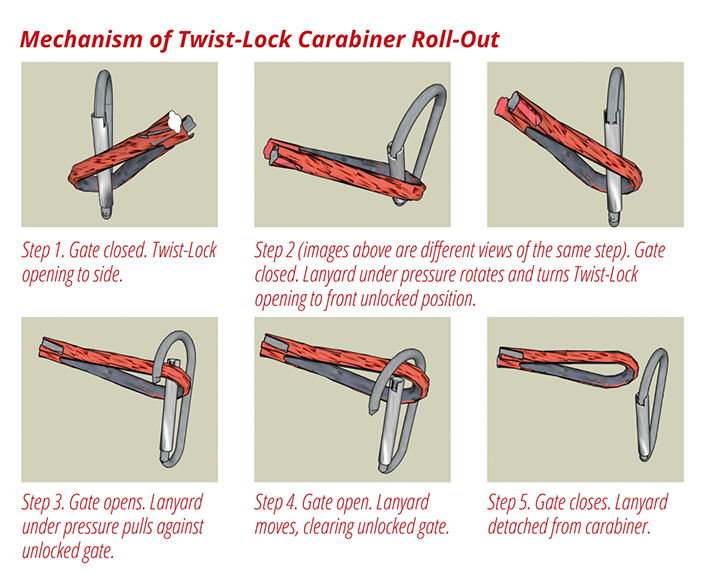 The Professional Ropes Course Association (PRCA) continues to offer a discounted $20 individual membership (down from the usual $85), which includes a copy of the ANSI 1.0-3-2014 standard that was developed under PRCA’s leadership. For larger corporations, discounted memberships cost $100, down from the usual $275. The aim is to make it easy for operators and vendors to become familiar with ANSI 1.0-3-2014. “We still want to get information out there and get people following it,” said PRCA VP and acting president Mike Barker. For information: www.prcainfo.org, 815.986.7776.

A meeting of key stakeholders of the North Carolina Aerial Adventure Course Association (NCAACA) took place at January’s ACCT annual conference in Texas. The group was made up of operators, insurance reps, and manufacturers, many of whom held specific roles for the association such as treasurer, note taker, PR/communications, legislative affairs, and liaison to ACCT. The NCAACA was formed as a way to share resources and data, and ensure they had a “voice at the table” after the state’s reaction to a couple of catastrophic incidents last summer. So far, the relationship between the NCAACA and the N.C. Department of Labor has been a “positive experience.” A common theme discussed with this group (and other groups Adventure Park Insider heard from) was the need for better research and data collection. We will follow the progress of this group and other regional and state aerial adventure course associations as more are formed. •