You are at:Home»Park Briefs»Air Fun in Greensboro
By Troy Hawks on April 17, 2015 Park Briefs

An indoor adventure park featuring wall-to-wall trampolines is set to open this summer in the 35,000-square-foot Harris Teeter store in the Golden Gate shopping center in Greensboro, Tenn. Mark Gold, a developer and investor who specializes in renovating retail centers, purchased the 151,371-square-foot property last year for more than $7 million. 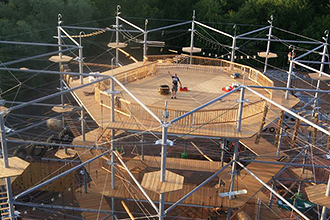 Shopping mall adventure park will be modeled
after these hexagonal designs.

Gold is building the AirFun adventure park in partnership with Eurobungy, a Miami-based company that he has partnered with on similar projects across the country. In addition to trampolines, the space will include a climbing wall, a ropes course for adults, an electric go-kart track, and party rooms for birthday events. The project is expected to cost nearly $2 million.

In total, Gold plans to invest $3 million to $4 million to revive the shopping center and said it is currently 90 percent occupied by retail stores.