You are at:Home»Park Briefs»What Happens in Vegas
By The Editors on January 2, 2015 Park Briefs 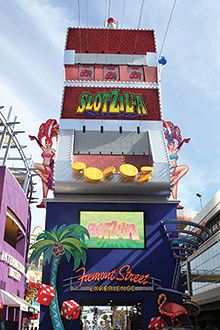 On Jan. 2, a man was suspended for nearly an hour on SlotZilla, a 1,700-foot zip line that’s part of Las Vegas ’ bustling Fremont Street Experience. After being launched from a 12-story slot-machine-themed platform, the carabiner on the rider’s harness dragged on the cable, causing the stall, according to FSE president Jeff Victor. The rider was left hanging 114 feet off the ground. After SlotZilla employees were unable to rescue the man, local firefighters arrived on the scene and brought him down via a rescue truck bucket arm. Victor says only two of approximately 120,000 SlotZilla participants have gotten stuck since the attraction opened in April 2014.