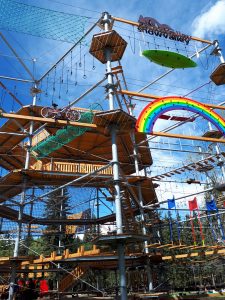 Levels are graded from green to black diamond, borrowing from Snow Valley’s ski history. A kids course on the lowest level is for climbers taller than 100cm. The tower is themed around the Rainbow Valley Campground, in which it sits, and includes a rainbow climbing wall and travel trailer.

The aerial adventure course was first proposed in 2013 as part of Snow Valley’s 10-year master plan, and part of a greater effort to carry the momentum from the busy winter months at the ski hill into the summer, which are typically very quiet.

Both Rainbow Valley Campground and Snow Valley Aerial Adventure are located within Whitemud Park, a recreational and activity park in the river valley region of Edmonton.