The Edmonton City Council has given the green light to Snow Valley Resort’s plan to add an aerial obstacle course to the nearby Rainbow Valley campground. 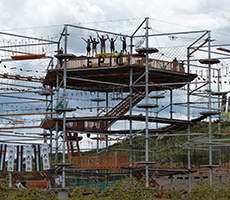 A similar installation to what is proposed at Snow Valley designed by KristallTurm at Castle Rock in Colorado.

The course, designed by KristallTurm, will be 15 meters (50 feet) high, with three levels featuring approximately 30 different obstacles. There will also be a children’s course with 19 ground-level elements.

The aerial adventure course was first proposed in 2013 as a part of Snow Valley’s 10-year master plan. It’s part of an effort to carry the momentum from the busy winter months at the ski hill into the summer months, which are typically very quiet.

Michael Walters, the city councilor for the area, believes the park will be a significant attraction for the city. “Snow Valley Ski Club has done a wonderful job of stewarding out [its]small piece of the river valley down there. And you know, [the idea for]this adventure rope park project has been around for a long, long time,” said Walters.

To obtain approval, an environment impact study had to be approved and the location deemed “essential” due to a rule in the city’s river valley bylaw.

Snow Valley hopes to open the C$1.6-million-dollar development in May 2017.