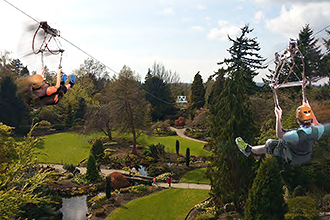 The Vancouver Park Board recently voted to install a temporary zip line in Queen Elizabeth Park this summer to help celebrate the park’s 75th anniversary. Board chair John Coupar said the zip line would likely run from June through September.

“It’s really like an aerial trail, and a great way to see Vancouver from its highest point and soar over one of the most beautiful gardens in the world. I actually can’t wait to take the first ride,” he said.

Greenheart International Development Corp., of Vancouver installed and operates the 600-foot zip line. The firm has constructed nearly 20 zip lines and canopy walkways around the globe, including sites at Grouse Mountain and near Whistler, on Las Vegas’ Fairmont Street, as well as other temporary installations at the 2011 Burning Man and in downtown Vancouver during the 2010 Winter Olympics.

As part of the deal, Vancouver gets a share of the profits if the zip line generates more than $75,000 in revenue.

“Basically it’s a cost-sharing in terms of the revenue. We don’t get any money until it reaches a certain level ,to pay back cost of installation,” Coupar said.