You are at:Home»Park Briefs»WildPlay Niagara
By Sarah Borodaeff on February 10, 2016 Park Briefs 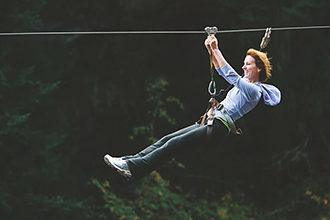 Construction is expected to begin this month on a zip line tour and aerial adventure course in Niagara Parks, ON.

“There’s a lot of behind the scenes work going on now, including the final designs, and construction will be starting in February, weather permitting,” says Niagara Parks senior director of business development David Adames. “We’ve been talking with stakeholders and they’re excited about the new product.”

The attraction, to be built and operated by Niagara Adventure Excurions and WildPlay, will feature four zip lines descending 670 meteres into the Niagara gorge from Grand View Marketplace. Additionally, an aerial adventure course featuring 12-14 challenge elements will be located along the north side of the whirlpool at Thompson Point.

The Niagara Parks’ forestry department was called in to complete site preparations including removal of non-native, invasive tree species in the zip line flight path, replacing them with native plants at a rate of five to one.

The project is expected to take four months to complete with a ‘soft launch’ tentatively scheduled for late spring and a grand opening over the Canada Day holiday weekend.