Imagine in one corner John Travolta, arm thrust upward with disco lights flashing and a mirrored ball spinning. Imagine in the other corner venerable Ansel Adams, with tripod and large-format camera, capturing in black and white the austere natural grandeur of Yosemite. There are plenty of variations on the concept of a climbing wall, but in many ways, it breaks down into a kind of Travolta-or-Adams dichotomy.

That, at least, is the report that comes from leading wall builders as well as parks or resorts that have done particularly well at installing and marketing climbing walls. Put in simplest terms, the Travolta/disco approach suits an interior installation, while outdoor walls are more likely to go in the Adams/Yosemite route.

According to Adam Koberna, president of climbing-wall company Walltopia, interior installations represent the lion’s share of the business, and the objective is to create “a social space—a space that people want to be in and stay in.” Bright colors, lights, and music are all in play, and while clinics and competitions are, as might be expected, part of the event mix, so too are purely social functions. 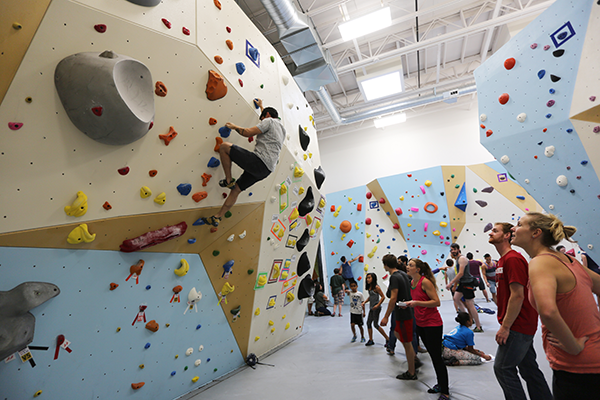 Climbers work through bouldering “problems” at the Portland Rock Gym

At Planet Granite in Portland, Ore., for example, Singles and Swingers Night gives participants a chance “to find that climbing partner.” There is also Parents Night Off, Trivia Night, and Movie Night. Rather than try to simulate an outdoor environment, says Koberna, places like Planet Granite “are embracing the indoors.”

Redouble that concept with bouldering, which is “an extremely social version of climbing,” says Christina Frain, director of marketing and sales for Eldorado Climb Walls. Bouldering entails multiple brief attempts to solve short climbing problems, so a typical scenario would have a few people on the boulder at any given time, with others watching, supporting the climbers, and awaiting their turn, rather than being actively engaged in the activity. The objective in a bouldering installation is to create “a lounge feel,” says Frain, for all the onlookers.

An indoor climbing facility might also feature fitness and yoga areas, although climbing is likely to be the featured activity. Local users who come for fitness and social engagement are apt to be the primary clientele.

A place like Epic Discovery at Heavenly Valley in South Lake Tahoe, Calif., on the other hand, is an entirely different concept.

Heavenly is part of the Vail Resorts family, which recently has been expanding Epic Discovery centers at its resorts, “adding one or two adventure activities every year” over the past few years, according to Chris Evert, Heavenly’s assistant manager of activities. Those activities might include zip lines, mountain coasters, and ropes courses—all outdoors.

In 2015, Heavenly chose to build a 35-foot-tall climbing wall with 17 routes. But rather than trying to generate a bright, festive environment along the lines of Planet Granite, Heavenly wanted its wall to blend in with its surroundings, to appear as natural as possible. The materials used were designed to simulate the color and texture of native Sierra rock. 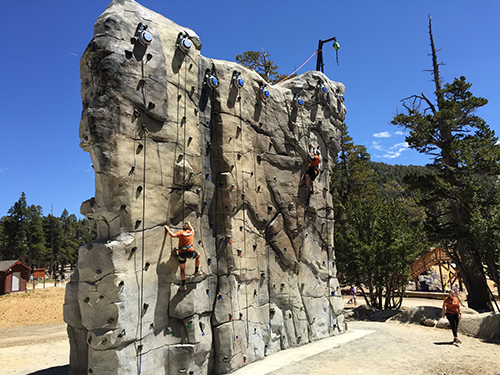 The outdoor climbing wall at the Heavenly Epic Discovery Center

In part, this was in keeping with a “learn through play” principle promoted by the U.S. Forest Service. Heavenly operates largely on USFS land, and a climbing wall mimicking the local geology helps to teach about the local environment. Bright colors and festive music would be counterproductive.

Both the function and target audience of the wall at Heavenly were entirely different from the kind of wall you might encounter at a typical climbing gym. Rather than sell wall-only tickets, Heavenly includes climbing as part of its Ultimate Adventure Pass group of activities, aimed mostly at tourist participants with little or no climbing experience. With this in mind, routes are generally no more than moderately challenging, with 5.9 the hardest rating, according to Eckert, and plenty of options easy enough for kids. (Koberna calls the 5.8 to 5.10 range the industry’s “meat and potatoes.”)

In some ways, the climbing wall at Heavenly functions as a holding tank to keep guests occupied as they wait for other activities, where lines are longer, to become available. The climbing wall can accommodate more guests at any given time than any of the other Epic Discovery activities; hence, according to Eckert, somewhere around 30 to 35 percent of the resort’s visitors participate in climbing. That’s far better, certainly, than having 30 to 35 percent of all guests standing in line as they wait their turn for the zip line or mountain coaster.

But perhaps the main reason to install a wall isn’t to relieve the ennui that comes with waiting in line; it is to meet popular demand. According to Frain, “The climbing industry as a whole is booming.” Koberna of Walltopia agrees. In the last five years, he says, business “has grown exponentially.” Interest has spread to places with little or no climbing tradition or natural opportunities to climb—places like Kansas or Ohio, according to Koberna.

A climbing installation does not, however, come cheaply. Koberna estimates the cost of Walltopia installations ranges from $200,000 to $1.5 million, with about $500,000 being the average. Frain gives a more modest price range, starting at $70,000 for a fiberglass tower and reaching to $400,000 for a more elaborate structure.

To keep installation costs from getting out of hand, Historic Banning Mills founder Mike Holder and his team at the adventure resort in Georgia engaged in a little out-of-the-box—or off-the-wall—thinking. Rather than hire a wall-building company like Walltopia or Eldorado, Holder decided to build a climbing installation using an in-house team. (Their work graced the cover of the Adventure Park Insider Spring/Summer 2016 issue.)That might not be a sensible option for many park operators, but Holder, as an experienced climber, came to the project with some expertise.

He also wanted something unique—something that would literally stand out from the crowd. The result was a free-standing climbing tower that, at more than 148 feet tall, has been officially certified by the Guinness Book of World Records as the tallest of its kind in the world. It came at a surprisingly low price, $320,000, according to Holder, with an estimated return on investment of just three years.

And while climbing was obviously the principal activity that the tower was designed for, the Banning Mills crew decided to integrate it with other activities, with seven zip lines coming and going from the tower. It gave the resort a real wow factor with marketing oomph. The resort’s main revenue source is overnight stays in resort lodging, and Holder says that many guests “wouldn’t come at all if we didn’t have this adventure.”

Because the tower was so unusual, insurance companies steered clear of it initially. Holder says that only high-premium, we’ll-insure-anything Lloyd’s of London was willing to come on board at first. But after a safety record had been established, “all sorts of companies are in on the bidding,” Holder says.

Indeed, climbing walls have proven to be a remarkably safe activity. In two years of operation at Heavenly, there have been no wall-related injuries, according to Eckert. The safety record comes despite this being an activity with few firmly established inspection methodologies or safety standards. While some states, California in particular, might insist on safety requirements, it is more likely that insurance companies are the driving force in installation standards, regular inspections, and guide training.

Keep your audience in mind. The vast majority of climbing-wall participants are novices, not experts training for an ascent of El Capitan.

And finally, consider an installation with a unique, alluring cachet—something like the tower at Historic Banning Mills. Climbing walls are independent, man-made structures, not installations depending on a particular environment or topography. Make of it whatever you want. Anything goes.