You are at:Home»Park Briefs»Walltopia HQ in Bulgaria Hit by Arson
By Rick Kahl on July 9, 2020 Park Briefs

On July 5, at 3 a.m., arsonists attempted to set fire to the headquarters of Walltopia in Sofia, Bulgaria. A group of four attackers used incendiary liquid to ignite a 50-foot, rainbow-colored banner on the facade of Walltopia’s building. 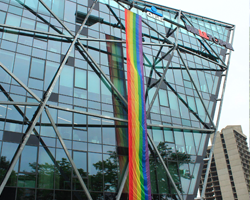 “The attack is clearly a case of hate crime, as it targeted the rainbow flag,” said Walltopia chief marketing officer Sofia Cohen.

Each summer, Walltopia mounts the rainbow flag on the building’s facade, to show its support and solidarity with people of different sexual orientations and gender identities. In Bulgaria, as in much of the world, members of the LGBTQ community live with limitations to their rights, and are often subject to discrimination as well as physical and verbal attacks.

“At Walltopia we believe in the right of every human being to be who they are,” the company said in a statement, “and we firmly stand by their right to be free and happy, regardless of their gender, sexual orientation, race, or ethnicity. That is why we see the crime committed against us as a crime against all those who identify with the same values. We remain hopeful that law officers will find the perpetrators and they will take responsibility for their actions.”