You are at:Home»Park Briefs»Branson to Get $10 Million Adventure Park
By Ilissa Maiatico on November 3, 2015 Park Briefs 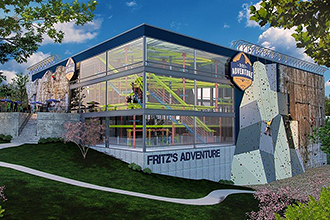 A rendering of the three-story, two-acre park.

The city of Branson, Mo., a popular tourist destination, is making way for a new $10 million adventure park. Fritz’s Adventure, a three-story, two-acre park, will include rock climbing walls, zip lines, a massive ropes course, and a life-size water tower with slides.

The park will be located on Missouri’s Route 76, home to a stretch of entertainment theatres that helped put Branson on the map. It will occupy the land where the Silver Fountain Inn once stood; demolition of the hotel started earlier this month.

Fritz’s Adventure, being constructed by Matt Engram Construction and expected to open in summer 2016, is just one of many projects planned to help revitalize the area. The end goal is to turn Route 76 into a “linear amusement park” complete with restaurants, retail shops, and attractions, said Ann McDowell, executive director of Project Branson, a private economic development group that’s currently working with the city. Plans also include adding a trolley and bike lanes to make the area more pedestrian friendly. The entire revitalization project is expected to cost upward of $80 million.