You are at:Home»Park Briefs»Adventure Park Derailed by Hurricane Gets New Owners
By Sarah Borodaeff on January 10, 2019 Park Briefs

The TreeUmph! Adventure Park in Brooksville, Fla., was auctioned off in late 2018 to Canadian businessman Albert Barbusci, who also co-owns the Orlando Tree Trek Adventure Park. The change comes in the wake of Hurricane Irma, which struck in the fall of 2017 and did extensive damage to the trees and equipment, just as the park was preparing to launch. TreeUmph! sought financial help from the county, such as the deferment of lease payments while reviving the damaged park, but was unable to reach an agreement with the county, and closed the park less than a year into operations. 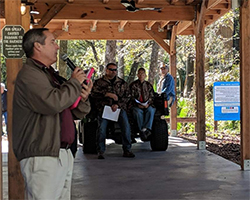 An auctioneer takes bids at TreeUmph! in Brooksville, Fl.

The purchase includes all the ropes course equipment and infrastructure down to the iPads and coolers. Barbusci declined to share how much he paid for the park, only that he was the next highest bidder to the Hernando County Commission, which backed out of its winning $140,000 bid in December after a county commissioner voted against it.

Barbusci acknowledged the calculated risk of taking on the project. “The intent is to go in and rebuild, make sure we create some good amenities for the park, get the community involved first,” he said.

It could prove to be a risk worth taking. TreeUmph! Brooksville was built on Hernando County land as part of the county’s rebranding as the “Adventure Coast.” To entice development, the county had offered TreeUmph! a rent of $100 per year for the first two years and paid for $650,000 worth of infrastructure on the site, including parking, picnic areas, and fencing, as well as planning fees. In turn, TreeUmph! was to invest $1.1 million to construct the park.

While there is no current timeline for the re-opening, Barbusci believes the park can be the economic success originally envisioned by the county. The park was originally expected to draw 25,000-40,000 guests annually and generate $2.35 million in economic impact.