You are at:Home»Articles»Get the Picture? Photo programs:
By Moira McCarthy on February 1, 2015 February 2015, Marketing, Operations

“Automated is cool,” says O’Grady, “but with it, it is difficult to get that family photo everyone wants.” Safety requirements often limit the number of people permitted on some platforms, and in certain parts of parks, you don’t want guests being slowed down. So resorts need to determine where the good photo ops are, and where photos just don’t work well, and then cover those photo ops with a combination of automated and handheld cameras.

Handheld, of course, sounds expensive. And staff training on photography is a must. O’Grady says that staff needs to learn how to get great photos without slowing down the tour time, and how to do so safely.

Sound difficult? Not really. Cypress Hills Eco-Adventures, with two adventure parks in Saskatchewan, Canada, has found its entire Fotaflo picture program a giant win, according to CEO Jori Kirk. The company hosts zip line canopy tours, a treetop adventure park, and mini-zips for kids, plus slacklines, climbing walls, and a “treetop drop.” The park is full of photo ops, in short, and is capitalizing on that in every way possible. 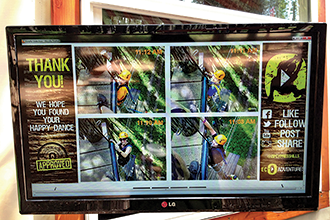 Guests at Cypress Hills must walk past a photo viewing screen as they exit the course.

“The key part of this is the potential we see,” says Kirk, who has had a system up and running for two seasons now. “And a big key to that is tracking. With these images, we can make an actual connection to what we are doing and how it is impacting marketing.”

Kirk believes that marketing impact needs to be better understood by park operators. “Once we operators change our mindset—a majority of us still look at these images as just a revenue stream—everyone will be on board.”

Kirk notes that the images are, “the one way we can create content that we have generated, yet the guest feels a vested interest in.”

Since he uses all handhelds for now, he depends on his staff to take great photos. To get buy-in from them, he developed an incentive program: Staffers get a kickback of 50 percent of the profit from every photo they sell. “That motivates them,” he says. And it helped him management-wise, too. With one employee making an added $1,800 in the parks’ two-month summer season, and many others doing well, he saw his employee retention rate climb to 80 percent this last season.

But it’s not enough to take, and sell, great photos. For full marketing impact, they must be accessible and easy to share. To do that, Cypress Hills placed a photo viewing screen in a spot that guides and guests must walk past as they exit the course. And that, too, motivates guides. “Guides want to end the tour in a positive way, so they want those photos guests see at the end to be good. They talk about them and help the guest choose. It’s a great wrap-up.”

Then, it’s all about the market and the share. “We must be able to track the targets of these shares,” says Kirk. They do, and they have seen a very significant impact so far: Two years ago, before the photo system, the park saw 12 percent return customers and 10 percent word-of-mouth customers. Last year, after the photo program had been in service for a year, Cypress Hills had 28 percent return visitors and 36 percent word-of-mouth. “That’s directly from the photos,” he says. The park also did a client survey in which, he says, “a massive amount either came because of a photo they saw, or were told by a friend who saw an image. It’s just there, as-plain-as-day clear.”

Kirk is a huge fan of handheld photography; he feels that the guide and the guest become invested in it, and it cuts down on the number of unusable photos that result. “With automated, you are going to get those shots with someone looking the other way or picking their nose,” he says.

And in the end, while good photos seal the deal on the experience, bad ones can put a damper on it. “You can have the most amazing tour, and it could be ruined by the photos at the end,” he says. “Doing this right is important.”

Moira McCarthy is a longtime journalist who serves as the winter sports editor (and columnist) at the Boston Herald. She has written for Snow Country, Ski, and Yankee Magazines as well as Disney Interactive, and for trade journal Ski Area Management. She is also a nationally known speaker on diabetes advocacy and life with diabetes, having written "Everything Parent's Guide to Juvenile Diabetes," as well as "Raising Teens With Diabetes: A Parent Survival Guide" and four other books. She has been involved with the Juvenile Diabetes Research Foundation for 17 years and was JDRF International Volunteer of the Year in 2007.