To borrow a phrase, it takes a village. That, at least, was what the folks at Treetop Trekking figured a couple of years ago when looking for a strategy to penetrate the family market. In order to attract families to its park, the Canadian company determined that it needed an activity for kids—very young kids.

Thus was born a concept called Treewalk Village, the first of which opened at Treetop’s Stouffville park, near Toronto, in 2015. That was followed by a second Treewalk Village at the Skywood Eco Adventure Park, operated by the St. Lawrence Parks Commission in Mallorytown, Ontario.

The villages are essentially parks within parks, designed to keep kids between three and nine years old occupied and happy, although kids as young as two have participated as well. Happy kids equate to an increase in park revenue; in addition to entry fees to a Treewalk Village, the accompanying parents, siblings and friends partake in other activities offered at the parks.

According to Treetop Trekking marketing director Mike Stiell, Stéphane Vachon, one of the company’s owners, saw a kids adventure course while visiting Europe and “decided to put his own spin on it.” (An interesting pattern might be developing here. In previous Park 360 columns, park operators have reported coming up with innovative ideas after seeing something they liked while traveling abroad.) Vachon’s spin at the two Ontario parks turned out to be a network of treehouses about eight feet off the ground, connected by ramps, net walkways, tunnels, and slides, all fully enclosed for safety. The design eliminates the risk of falls, so there’s no need for harnesses or other safety devices. Just set kids loose and let them explore. 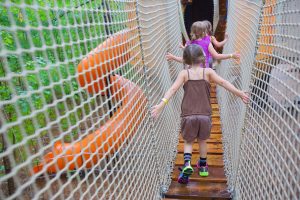 One of the netted walkways that make up the kids course at Skywood.

In short, a Treewalk Village is one of the coolest playgrounds a day-care-aged kid would ever want to hang out in. Especially when you toss in a so-called “tree-wee” obstacle course on the ground. “The kids just let their imaginations run wild,” says Stiell.

What didn’t run wild were the costs. The company minimized installation costs by keeping most of the construction work in-house. An engineering firm was hired to determine the weight-bearing capacity of trees that held the treehouses, and to determine how the houses should be attached, but that was it for outside help.

Operationally, Treetop Trekking had come up with an activity that required relatively minimal staff. “The low HR is one of the great things about it,” says Stiell. “We can run [a Treewalk Village]with as few as two staff rangers, plus check-in staff.”

A few basic parameters make that low staffing possible. For starters, one parent/adult is required to accompany every six kids in the village. Parents can’t simply drop their kids off at the village and disappear to enjoy themselves elsewhere in the park; at least one parent must assist in a supervisory role.

Also, among a handful of other village rules, kids aren’t allowed to play tag-like games, which keeps potential mayhem at a minimum. Finally, village capacity is kept at 250 people at any time for the two-hour limit in the village, with visitors being rotated in and out every half hour.

Having preschoolers involved in an adventure activity might seem to raise a red insurance flag. But according to Stiell, the fully enclosed design of the activity reduces the risks of injury to next to nothing. Scraped elbows and knees, a few bumps and bruises, a few tears—that’s about it. The result, says Stiell: no insurance increase.

In its 2017 State of the Industry Report, Adventure Park Insider identified the two- to five-year-old demographic and the senior demographic (55 and older) as “the biggest growth markets.” In other words, the day-care crowd represents an important area of untapped revenue potential. To quote the report: “Having options that appeal to multiple generations, and marketing them in a way that appeals to all ages, will be a key to future growth.” 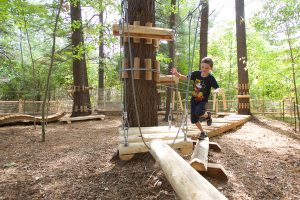 The kid friendly course by Treetop Trekking keeps kids of all ages entertained.

“All ages” is the key concept here, because day-care-aged kids can’t, of course, be looked at as a standalone demographic. The super young don’t just show up at a Treewalk Village on their own. Parents and other family members and friends obviously must accompany them. The money they spend bringing the little ones to the park, and perhaps enjoying some activities themselves, would be spent elsewhere if such an attraction didn’t exist.

Indeed, that’s what fills out the bigger picture in the Treewalk Village concept: Enlarging overall park visitation. Stiell says the impact of adding Treewalk villages was obvious and immediate. After the villages were installed at the two Ontario parks “a significant increase in [overall]revenue” was achieved.

The idea, essentially, is to have something for everyone of every age and physical ability. So Treetop Trekking has also tried to fill any demographic gaps between the Treewalk Village crowd and the nine-and-over age group that participates in the park’s aerial adventures. One solution: Discovery courses. These are toned-down adventure tours “designed for kids five and older,” according to Stiell, “but are also for people with limited mobility or a fear of heights.” Conceivably, a Discovery course might also be a way to address that other potential-growth demographic: seniors.

What Treetop Trekking has done with its Treewalk Villages is to “fill a void,” as Stiell puts it. The company realized that parks without an activity for young kids tend to “exclude families, school groups, and camp groups,” he says. Inclusion over exclusion made mighty good sense.

Clearly, many park operators in North America have yet to identify the void or make an effort to fill it. According to the State of the Industry Report, two- to five-year-olds represented less than six percent of the visitors at pay-to-play operations, and a little more than two percent at traditional operations. At the same time, only about 10 percent of pay-to-play operators surveyed included kids parks among their activities (although the figure was closer to 30 percent for traditional operators).

Hence, an inverse of the “Field of Dreams” scenario would seem to apply: If you don’t build it, they won’t come. And remember, “they” includes not just kids, but accompanying adults and older kids.

While installation costs for a Treewalk Village obviously depend on the site and scope of the install, Stiell suggested that the price tag was relatively modest, and that operating costs were lower than for most other activities. If that kind of investment can immediately produce “significant revenue,” it would seem like a no-brainer. For anyone looking to maximize revenue potential, it just might take a Village.