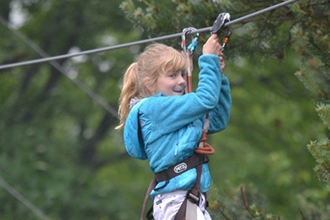 A recent injury study by the Research Institute at Nationwide Children’s Hospital in Columbus, Ohio, has charted the increasing number of zip line injuries that have occurred as the activity has become more popular in recent years. The study authors have urged more uniform and comprehensive standards and regulation of the zip line industry as a response.

The study was published in the October 2015 issue of the American Journal of Emergency Medicine.

The study is claimed to be the first to examine non-fatal zip line-related injuries, including those occurring on homemade zip lines, commercial operations, challenge courses, and canopy tours, using a nationally representative database. It covers the period 1997-2012.

Over the 16-year period, nearly 17,000 non-fatal zip line-related injuries were treated in U.S. emergency departments and recorded in the National Electronic Injury Surveillance System database, which is operated by the U.S. Consumer Product Safety Commission. Most of the injuries occurred in the last four years of the study; 3,600 took place in 2012 alone.

While the study does not attribute the rise in injuries to any one type of zip line operation, it notes that as of 2012, there were roughly 13,000 zip lines in camps schools and backyards in the U.S. It observes that there were only a handful of commercial parks in 2000, but more than 200 in 2012.

Among cases where the location of the injury event was known, 31 percent of injuries occurred in a residential setting, and 69 percent occurred in a public (camp, school, or commercial) place.

The demographics of the injured persons reflect the preponderance of backyard, camp and school installations. Children 9 and younger account for 45 percent of the reported injuries, and youth 10 to 19 make up another 33 percent.

Falls were the most common mechanism of injury, accounting for 77 percent of injuries. Collisions were 13 percent of the total.

The greatest percentage of injuries was for fractures, at 46 percent. Less common were bruises (15 percent), cuts and sprains (15 percent), and head injuries (7 percent). Eleven percent of all injuries required hospitalization.

In response to the increasing number of injuries, the study authors urge that all commercial and non-commercial publicly accessible zip lines be subject to the same standards, and that these standards be made uniform in all states and jurisdictions. Given the relatively high percentage of backyard injuries, the authors say that homemade zip lines should not be used.

According to an AP report on the study, industry representatives emphasize that commercial operations and others public entities have adopted safeguards. James Borishade, executive director of the Association for Challenge Course Technology, said that zip line operators “are working to minimize that risk.” Mike Barker, vice president of the Professional Ropes Course Association, said his group has strict safety standards that recommend that courses be routinely examined by independent inspectors.

The study advises those who wish to zip to seek out operations that meet industry safety standards and have a well-trained staff. It encourages participants to follow all posted rules and instructions from staff, to wear proper safety equipment.