The Wildwood, Mo., city council voted to allow Hidden Valley Ski Area to move forward on the installation of a zip line attraction. The attraction will include four long-span zip lines and cost an estimated $2.5 million to build. The resolution passed by a vote of 13-3. 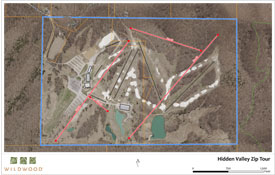 Before getting to the city council, the planning and parks committee made some adjustments to Hidden Valley’s original proposal, including limiting operating hours from 9 a.m. until sunset and requiring one of the lines to be relocated so it’s farther from neighboring residents’ homes than initially proposed. The zip lines will operate year round.

The project has been dramatically debated for months and, at one point, looked as though it would not come to fruition. Without the new attraction, officials from Peak Resorts—Hidden Valley’s parent company—said the future viability of the resort would be in jeopardy. The city council’s approval likely calms those concerns as it paves the way to four-season operations, opening up additional year-round revenue and employment opportunities.