You are at:Home»Park Briefs»Where Next for Adventure Parks?
By The Editors on January 30, 2015 Park Briefs

One way to measure the explosive popularity of zip lines, canopy tours, and aerial adventure parks is to note the range of locations these facilities are sprouting up. 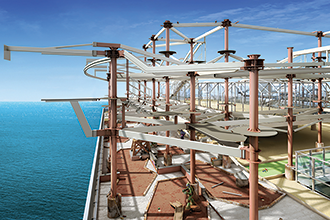 For example, the three-story multiplex course being built on Norwegian Cruise Lines’ 4,200-passenger Norwegian Escape. When completed later this year, the attraction will feature two six-inch-wide planks that extend eight feet over the sea (seafarers will literally walk the plank), along with zip lines, an aqua park, and “the biggest ropes course at sea.”

Back on shore, Jordan’s Furniture in Reading, Mass., unveiled an in-store ropes and zip line course in December. Named Beanstalk, the two-level course is 32 feet high and includes a 69-foot zip line. The store also has a smaller course, Beansprout, for kids.

Even governments are getting in on the act. In Ohio, Richland County plans to start work on the largest water and adventure park in the state, which will sit on 207 county-owned acres. And the state of New York contracted with British Columbia-based WildPlay Element Parks to build a treetop adventure course at John Boyd Thacher State Park near Albany, the state capital, slated to open this summer.