Pick a cliché, any cliché: Making lemonade from lemons, finding sunshine on a cloudy day, making a silk purse from a sow’s ear. The types of settings that normally inspire aerial adventure park developers and operators are rich with scenery, wildlife, and lush vegetation. But a few creative park developers have been able to use their imaginations to see beauty where others might see blight.

Consider the examples of a park built in an abandoned mine, or a park with its origins on the site of a polluted, shuttered gas station and gift shop. Louisville Mega Cavern and North Shore Adventure Park are just two examples of what’s possible when developers are willing to apply out-of-the-box conceptualization to settings that don’t exactly match the template for the usual adventure-park environment. (Both locations are, however, positioned to tap into robust tourist markets of millions of visitors annually.)

Actually, simply calling Louisville Mega Cavern an abandoned mine is akin to calling New York City a nice little town. The cavern is enormous. For more than 40 years, from the 1930s to the 1970s, crushed limestone was harvested from the site, leaving behind a subterranean realm of about 100 acres, with 17 miles of underground passageways reaching heights of 100 feet.

It could simply have remained a giant, empty hole in the ground. But in 1989, a group of private investors bought the former mine with the idea of turning it into a temperature-controlled storage facility. Because year-round temperatures in the cavern remains constant, in the 50s, it is ideal for the storage of items sensitive to heat, cold, or light.

In addition, with no natural food sources, there are no pesky rodents or other vermin to do damage to stored materials, according to Louisville Mega Cavern marketing manager Leslie Green. Today, for example, old movie reels are stored in the facility, including the original reels of Gone With the Wind. 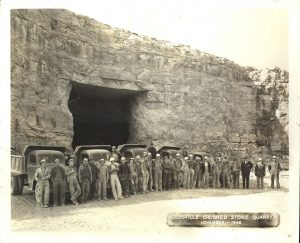 Over time, the cavern became host to a variety of uses, including office space and a dirt-stone-brick-concrete recycling operation. (Interestingly, the cavern is zoned as a building, technically making it the largest building in the state of Kentucky.)

The idea of some sort of adventure park began to infiltrate the mix in the mid-1990s, according to Green. And why not? There was plenty of undeveloped space. Configuring the space for a varied menu of recreational activities would be relatively easy. No felling of trees, no bridging of streams; just wide-open spaces. Protection from foul weather and the temperature consistency—naturally air-conditioned during hot summers, naturally heated during cold winters—were great for year-round recreation. And because it would be the only underground adventure park in the country, the marketing possibilities were clear. 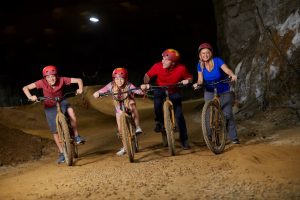 A 320,000-square-foot bike park, with terrain features built from recycled material, can host as many as 200 riders at a time.

The result has been a park that draws 400,000 to 450,000 visitors annually. And it continues to evolve. A 320,000-square-foot bike park, with terrain features built from recycled material, can host as many as 200 riders at a time.  Six zip lines, with riders equipped with headlamps, enable a 2½-hour tour through the cavern’s inner reaches. There is an aerial ropes course and, for those less recreationally inclined, an historical tram tour. Meanwhile, the park operators have been working to get the necessary permits to host spectator events and concerts.

The overall result is an operation that has earned a rating as Louisville’s number-one tourist attraction on TripAdvisor. Not bad for a setting that never sees the light of day, in a city that can also boast, among other attractions, Churchill Downs, home to the Kentucky Derby.

Seeing Past the Gas

Return now above ground to the tiny city of Silver Bay, Minn., on the scenic north shore of Lake Superior. That’s where Phil Huston, now 67, chose to settle into retirement, and, where, with deep forests, low hills, and lakeside seascapes, the creation of an adventure park made absolute sense. 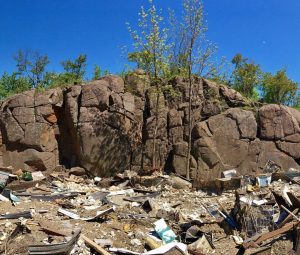 “Eleanor”, the home of rock climbing at North Shore Adventure was once an eyesore in the community

However, beauty is in the eye of the beholder. Where Huston was inspired to establish the beginnings of what he hopes will grow into a multi-activity park was not the location most people would’ve chosen. In fact, the abandoned and overgrown gas station and gift shop was a bit of an eyesore on the 200-mile North Shore Scenic Drive between Duluth and the Canadian border. Plus, Huston was a retiree with no experience in park development. (Read more about the development here, “North Shore Adventure Park Enters Phase One“)

But Huston was a lifelong rock climber, and as he drove along lakeside Route 61, he noticed, less than a foot behind the gas station, an interesting rock formation that he figured might make a great climbing wall for beginners. Next thing he knew, the vision for the North Shore Adventure Park began to take shape, and he and three sixty-something partners were raising the capital, both public and private, to develop the site.

The idea was to turn the rock formation into the setting for an activity (or activities) to match the outdoorsy interests of typical North Shore visitors, who total more than three million annually, according to Huston. “There was nothing like it up here,” says Huston. “And nothing for kids to do.”

The first assignment for the four sexagenarians was to clear the site—no easy task. Knocking down the dilapidated old building and ridding the rock of weeds were the easy parts. Site cleanup was another thing: As is the case at many old gas stations, the site was heavily contaminated with years worth of spillage, seepage, and leakage of petroleum products.

Huston and partners relied on grants from such institutions as the Iron Range Rehabilitation Resource Bureau, which contributed $200,000, to truck out “loads and loads of material,” he recalls. “It was tricky, with a lot of bedrock and crevasses leading to pools that required pumping out contaminated water.”

The rock wall opened last summer as a “test run,” with little effort to promote or market the activity. “Everybody absolutely loved it,” says Huston. It was a start, with a much larger development in the plan. 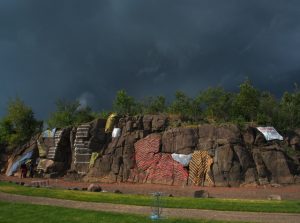 The climbing operation was shut down this summer to make way for the realization of the larger vision—to create, along with the climbing wall, an adventure park that will include zip lines and an aerial ropes course, taking advantage of a narrow ravine behind the wall.

This was in keeping with “a comprehensive plan [by the city of Silver Bay]to improve the corridor,” Huston says. Toward that end, the investors were able to purchase from the city eight acres behind the wall for the nominal price of $9,000, with the understanding that a park would be developed.

And that’s where the project stands. Just what will be developed is an open question. Huston’s initial plan was to have 50 to 70 features on the aerial course, including ziplines and courses of various difficulties for beginners to more experienced users. He also envisions cross-country skiing and fatbike and/or mountain bike trails. The aerial courses alone, Huston says, will require an investment between $500,000 and $1 million. On the plus side, a feasibility study conducted by Strategic Adventures of Littleton, Colo., estimated the park could attract 20,000 to 30,000 visitors annually, more than enough to make this a going concern.

While the idea was dreamed up by Huston and company, they do not expect to be part of the full implementation—that task will fall to others. The investors and founders intend to return to retirement leisure. Huston and his partners, in addition to being of an age not usually associated with initiating large projects, have no experience in adventure park development or management.

But they saw a site and saw its potential, and they set the development process in motion. Now they hope to farm the project out to “builders and operators who know what they are doing,” says Huston.

What developers have done in Louisville and what investors have seen in Silver Bay is possibility, in environments where others might see emptiness or dilapidation. Not all potential park sites necessarily feature the kind of overt natural beauty that developers are usually drawn to. Lesson learned: With a little imagination and vision, remarkable things are possible in the least likely places.