You are at:Home»Park Briefs»Steamboat Goes All-In on Summer
By Rick Kahl on June 21, 2017 Park Briefs 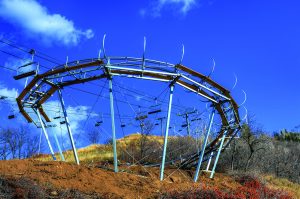 Steamboat Ski Resort in Colorado has added a Wiegand mountain coaster, mini golf, and more to its already extensive base area summer offerings to create the new Coca Cola Adventure Zone at Steamboat. The Outlaw Mountain Coaster, which will operate year-round, descends 420 vertical feet with a riding length of more than 6,280 linear feet (2600 feet uphill and 3680 downhill), making it the longest mountain coaster in North America. It winds around and under the Christie Peak Express lift. A barn-shaped bottom terminal fits the Steamboat theme and will house carts overnight. The coaster is currently scheduled to open in mid-July.

The new mini-golf course’s front nine is on level ground, but the back nine is tiered into the slope underneath the Christie and Preview lifts. It features ponds, waterfalls, and other obstacles. Other additions include a three-story-high climbing wall on the side of the gondola building, summer tubing off a Magic Carpet, and a ropes course.

The entire base-area site has been carefully landscaped for aesthetics and functionality. One example: There’s a paved, heated walkway up to the coaster, mini-golf, and new summer tubing hill. It will enable non-skiers to access the coaster for night riding during the winter when night skiing is also underway.

Biggest challenge, says VP of skier services Jim Schneider, was designing the path of the coaster, which passes over and around ski terrain and lifts, plus electrical and gas lines, snowmaking and other infrastructure. The route was re-staked several times, and in the end Steamboat relocated some existing infrastructure to make everything fit.