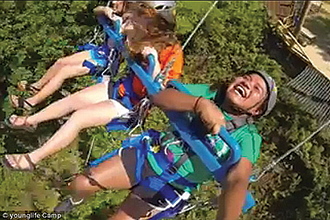 The Freebird pendulum swing at Carolina Point Camp was closed after a fatal accident.

South Carolina labor officials ordered that a pendulum swing ride cease operation after a 16-year-old female fell from it and died. Investigators said that the victim was seated and attached to the pendulum on the Freebird Swing at Carolina Point Camp in Sunset, S.C.,along with two other participants when she became unattached and fell approximately 100 to 120 feet to the ground.

After the incident, inspectors determined that the swing meets the definition of an amusement ride, which requires permitting and inspections. The swing will not be allowed to reopen “until the camp applies for a permit and a determination on its operation is made by the Office of Elevators and Amusement Rides,” says Lesia Kudelka, spokeswoman for the South Carolina Department of Labor, Licensing and Regulation.

The incident illustrates the somewhat confusing regulatory environment that can surround aerial parks. Initially, Kudelka says that the swing had not been inspected by the state but did not “appear to meet the definition of an amusement ride in South Carolina.”

State officials later investigated the scene of the accident, and determined that the swing does, indeed, meet the legal definition of an amusement device.

Another complicating factor: the Carolina Point Camp straddles the South Carolina/North Carolina border. Had the swing been located on the North Carolina side, says Dolores Quesenberry of the North Carolina Department of Labor, it would not be required to be permitted or inspected. She adds that it’s up to park operators to contact state officials if they’re unsure whether a permit for any ride is required.

Carolina Point is part of Young Life, a Christian organization based in Colorado Springs, Colo., that operates 35 camps throughout the U.S. and internationally. Terry Swenson, vice president of Young Life, says 12 other camps have similar swing attractions, all of which were closed following the incident.

“Safety is our highest priority at Young Life camps. For all rides at our camps, including the swings, we observe strict protocols regarding upkeep of equipment as well as safety training and operating procedures,” Swenson says.

Swenson adds that the camp’s swing and zip lines meet the standards of the Association for Challenge Course Technology (ACCT), “which industry experts have informed us are far more rigorous” than the state standards. •