You are at:Home»Park Briefs»Petzl Rope Trip is a Trip
By Dave Meeker on May 14, 2016 Park Briefs 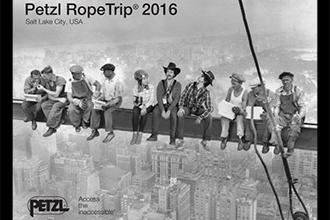 If you are an adventure park or zip tour guide, your job has a lot in common with other work-at-height professions: the proper use of equipment, safety protocols, awareness, and an affinity for being high off the ground. It takes skill, strength, and talent to work at height. But some in the work-at-height world take it to a whole different level.

Just how high a level became clear to me at the Petzl Rope Trip in early April. During this three-day extravaganza, rope access technicians—the folks who dangle outside office buildings washing the windows, install hardware on an oil rig, or fix a wind turbine hundreds of feet off the ground—from around the world put their skills and courage on display.

This bi-annual event gathers the global rope access community for competition, collaboration, and education. The event started in 2012 at the Petzl world headquarters in Crolles, France; the second was held in Uppsala, Sweden in 2014. For the 2016 iteration, the company showcased its newest state-of-the-art facility—the Petzl Technical Institute (PTI) in Salt Lake City, Utah. Props to Petzl for constructing a spectacular building. The door pulls for main entrance are ice axes. How cool is that?

Thirty-one three-person teams from 16 different countries competed in timed challenges that took them, as Petzl puts it, “through vertical labyrinths, testing precision, communication, technical skill, forethought, and speed.” Two days of qualifying rounds were held in, on, and around the 85,000 square-foot building, whose centerpiece is a massive 55-foot tall multi-pitch climbing wall.

Understand that I’m afraid of heights. So I spent the weekend watching people participate in activities that would totally freak me out. It was like someone with cynophobia going to the Westminster Dog Show.

Just off the main lobby inside the PTI is the climbing wall, which is surrounded by multiple levels of catwalks. There, on Friday evening, all competitors went through a mandatory skills test to ensure everyone was capable of participating in the event. (They were.)

Later, as the competitors were being briefed on the weekend challenges, I was in the lobby meeting Petzl people from all over the world. Mind you, the PTI is also Petzl’s North America headquarters, and houses the corporate offices. About 90 percent of the Petzl people I met were wearing helmets and harnesses. Considering the venue, it seemed pretty natural. I wondered if they typically went to meetings like that.

Saturday’s trials took the mood to a whole other level. Competitors and spectators were cheering on one other in many languages. Since the climbing wall is so big, multiple challenges were going on simultaneously. My Petzl friends and I climbed stairs to the catwalks to gain a better vantage point.

This was my first test. I could see right down through the metal grates to the floor below—two or three stories below. After some deep breaths and a pep talk (to myself), I got used to it enough to avoid freezing in fear.

All of the events were timed, but no one was rushing, because safety and proper use of equipment is a major component of the competition. Every competitor was under the watchful eye of numerous yellow-helmet-wearing Petzl judges. Any mistake that compromised safety, such as failing to clip in properly, was grounds for disqualification from that challenge.

One of the more deliberate but cool challenges involved a single competitor, navigating to various checkpoints, with a bucket full of water dangling on a rope several feet long from his or her harness. While other challenges had practical elements mixed with some fun, this one was all practical. After ascending from the ground and traversing to shimmy through the scaffolding backing of the climbing wall (all the while trying not to spill any water), competitors had to “fix a pipe” that was connected to the scaffolding. Once the vertical pipe was put together, the next step was to pour the water from the bucket down through the pipe into another bucket below. If the competitor made it through within the allotted time, the bucket of water was weighed, and whoever spilled the least during the venture scored the most points.

Tools of the trade

I was struck by how many different pieces of gear the competitors used to ascend, descend, anchor, etc. They all wore Batman-like belts of Petzl gear, and used every piece with precision, all while dangling several feet in the air.

I was curious to know what all the gear was for, so Petzl North America marketing director Dave Hugar gathered some experts to show me.

Petzl, I learned, has literally thousands of pieces of gear. It develops, manufactures, and sells equipment for those who live and work adventurously, obviously. But that’s only a portion of what the company is all about. Its mission is “to create innovative solutions, tools, or services that help people progress in vertical or dark environments.”

The new Institute itself serves that mission. It houses corporate offices, a distribution warehouse, and displays a historical timeline on the wall (which is a really cool feature, btw), of course, but also offers a venue where its experts can train and educate work-at-height professionals. “Technical Institute” isn’t just a fancy title for the building; it’s the purpose of the building.

During my product overview, Keese (pronounced “Keys”) and Bill took me through harnesses, rescue systems, belays, helmets, headlamps, ascenders, carabiners, etc. I gained a better understanding of much of the gear utilized in the adventure park industry. But this wasn’t a sales pitch, it was a lesson. They explained the features and the technology behind each product and never badmouthed other manufacturers. In fact, they spoke highly of some of their competition’s products. I learned what reactive lighting is and why the PANGA helmet makes a ridiculous amount of sense for high-volume adventure tour companies to use.

The Salt Lake City Public Library is a very cool structure. It also provided the setting for Sunday’s competition finals. On the side of the building, no less. It was a sunny afternoon, and a relatively small but raucous crowd gathered to watch the final four teams—two French and two Russian—take part in their last challenge. One of the Russian teams won the event in 2012, the other in 2014. The French had their work cut out.

The semi-finals had two teams at a time—one Russian and one French team in each heat—ascend a five-story structure, Tyrolean traverse over to the main library building, and then belay down the façade to attach metal clamps between the evenly spaced windows. Whichever team finished installing their clamps and ascended back to the roof of the library first, won. One French and one Russian team advanced to the final.

In the final, each team again ascended and traversed to the roof of the library. Instead of metal clamps hanging from their Batman belts, each competitor’s belt carried long, white tubes. These, it turned out, were rolled-up banners. Big ones. The teams were tasked with hanging the banners from the clamps they had installed during the semi-finals. The French team got its banners hung first, and the team members got back to the roof just before team Russia.

The final product: a pretty sweet display of Petzl branding and library bookshelf images which together jazzed up the building nicely. And the process itself provided a true display of the competitors’ skills, albeit not necessarily how a safety inspector would want to see it done on a work site.

If the event was intended to showcase Petzl’s Technical Institute, mission accomplished. It will serve a number of industries, including the adventure park business. I learned about a company whose purpose is not just to develop products and sell them to those who live adventurously, but also to educate and train those who work adventurously. Personally, it led to another discovery: I have a newfound respect for work-at-height rope access technicians, wherever and whatever they may be doing.