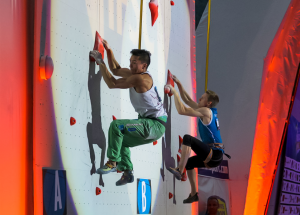 Sean McColl is a four-time climbing World Champion and harbors Olympic aspirations. Libor Hroza is one of the most well-known speed climbers in the world and has twice earned the title of European Champion.

In late 2016, climbing was officially approved as an event for the 2020 Olympics in Tokyo. It will include three disciplines: bouldering, speed, and sport climbing. Medals will be awarded based on the combined results of all three disciplines.