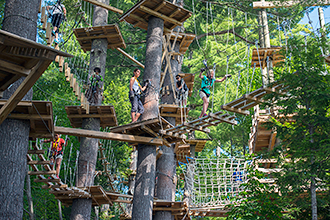 In New Hampshire, the Mt. Washington Valley (MWV) Chamber of Commerce said that thanks to a sunny forecast, businesses there reported strong traffic and increased sales compared with the prior year.

“Vacation plans are made or broken over weather forecasts, and we were grateful for the prediction for warm sunny days over Memorial Day. This, along with lower gas prices and strong traveler sentiment, contributed to a successful start to the summer,” said Janice Crawford, executive director of the MWV Chamber of Commerce.

Becca Deschenes, marketing director at Cranmore Mountain Resort, N.H., said admissions to its Mountain Adventure Park and Aerial Adventure Park were up 80 percent over last year. Sales of its combo pass, which grants access to both parks, was up 172 percent over the weekend. Food and beverage sales were up 62 percent from last year.

“I think the weather played a huge role after what seemed like a very long winter, it got people excited to be outside and for the warmer months ahead,” Deschenes said.

Meanwhile Anthony Wellman, communications director for the Adventure Parks of Outdoor Ventures, based in Connecticut, said the weekend saw impressive business volumes at all eight of the parks it operates, including its newest location in Sandwich, Mass., that opened earlier in this month.

“The combination of beautiful spring weather and rapidly spreading public knowledge about our parks and the quality of the climbing experience we promote led to record-setting sales volume,” Wellman said. “The American public is learning at zip line speed about what adventure parks are, and they love them.”

In addition to the Sandwich site, Outdoor Ventures operates two parks in Connecticut as well as a park at Sandy Spring, Md., reportedly the largest aerial forest park in the U.S. Other park locations include Frankenmuth and West Bloomfield, Mich., and the Adventure Park at the Virginia Aquarium, which also opened earlier in May.

In Georgia, Natalie Sanford, manager of the Sandbar on the shore of the Broad River near Bowman, said weather was perfect for introducing guests to the resort’s newly installed zip lines.

“Memorial Day weekend was awesome for our kayaking business,” she said. “We ran out of boats and zip lining is picking up. We had many people come out. But it’s not close to what we want to do yet, we’re just starting to advertise more, so hopefully it will pick up for us soon. We had more than 1,000 kayakers this weekend, so we’re hoping a few of those will come back to zip.”