You are at:Home»Park Briefs»Other Notable Park Projects
By The Editors on January 30, 2015 Park Briefs

Plenty of parks are also being built in more typical locales. In Boone, N.C., among the Blue Ridge Mountains, construction is underway on High Gravity Adventure, a new aerial park located next to Tweetsie Railroad, a popular family-oriented theme park. The park is owned by Challenge Towers Aerial Adventures, of Todd, N.C. Set to open in April, High Gravity Adventure will have more than 50 different challenges, including the Adventure Course, with three levels that progress from 20 to 50 feet off the ground. The park will also have a Junior Course for kids and, eventually, a zip line tour and freefall tower.

In Florida, the Orlando Tree Trek Adventure Course opened Dec. 20 in Kissimmee, near Walt Disney World, with a pair of 425-foot zip lines. The park incorporates six coded courses with a range of obstacles for kids and adults. Altogether, it has 97 games and elements. 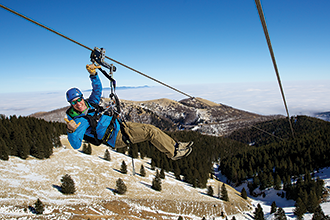 New Mexico’s Ski Apache ski area and Inn of the Mountain Gods Resort and Casino, under the same management, are launching several new zip line experiences. The three-stage Wind Rider ZipTour at Ski Apache opened Jan. 1. It starts top of the mountain, at 11,500 feet elevation, and finishes nearly 2,000 vertical feet lower, spanning more than 8,900 feet in length. The Apache Eagle Zip Line at Inn of the Mountain Gods will open later this year, and will whisk riders over Lake Mescalero at speeds of more than 30 mph.