You are at:Home»Park Briefs»New Parks Open Across the U.S.
By Troy Hawks on June 9, 2015 Park Briefs 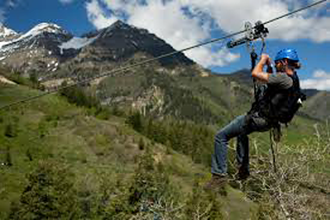 New aerial adventure parks and zip lines continue to open throughout the U.S., including installations of new parks in Florida, Massachusetts, Missouri, Utah, and Wisconsin.

In August, TreeHoppers, a new park in Dade City, Florida, will open. It will be operated by Indiana-based White River Zip Lines, on a 60-acre wooded tract of land purchased by the company. The property features several acres of scenic, hilly forest and a five-acre lake in the back of the property.

The park will feature dozens of zip lines, rope bridges, and aerial climbing elements. In all, the park will have eight unique courses and nearly 100 aerial features catering to adults and children ages 5 and older. TreeHoppers will be open year-round, seven days a week.

In Plymouth, Mass., DropZone, an outdoor adventure park located near the Municipal Airport, opened in May after receiving its operating license from the Department of Public Safety. Owner Gerry Olson has been working on the project since 2006, and said initial response has been strong.

The park’s main feature is a high ropes course that includes bridges and obstacles separated by a series of 400-foot zip lines. A “quick jump” free fall offers a fast descent, and a competition rock wall is set up nearby for races and skill development.

Olson worked with Adventure Solutions of Essex, Md., in building the park, and staff is trained and certified to Association for Challenge Course Technology standards. DropZone was open 10 a.m. to 7 p.m. Saturdays and Sundays this spring, but Olson expects to operate seven days a week during the summer.

In Missouri, the Camden County Planning Commission signed off on a conditional use permit for a zip line at Picklehead’s Roadhouse Event Center near Sunrise Beach. Dan Laubach, who applied for the permit, said the zip line will be open during the six events scheduled at the center this season.

Earlier in the year Laubach built two zip lines at the facility utilizing a state amusement ride license. The side-by -side 550-foot zip lines were designed by Schultz Surveying and Engineering, Branson, Mo., and were built by Beyond the Ropes, Norman, Okla.

In Utah, the Sundance Kid himself expects to go zipping along what is billed as the third-longest zip tour in the U.S. Opened in May, the two-mile-long Sundance ZipTour is located at Sundance Resort. Owner Robert Redford said he plans to be the first one in his family ride the zip line’s four spans. The four spans range from 936 feet to 3,871, with its longest—the Outlaw—listed as the sixth-longest in the U.S. As part of Sundance’s commitment to preserve the environment, the resort used helicopters in the installation in order to minimize the impact of construction.

ZipTour of Park City, Utah, built the Sundance tour, which employs its patented trolley mechanism that lets riders to control the speed of their descent, allowing for a 2,100-foot vertical drop—reportedly the most of any zip line tour in the U.S.

“It’s a user-based dynamic trolley that allows you to control your speed, and the lines themselves are able to be built more dynamically so that you can have steeper, longer runs,” said Czar Johnson, director of mountain operations at Sundance Resort. According to Johnson, the operation’s system has been over-engineered to provide a certain sense of safety and comfort for users.

The resort anticipates the new attraction will draw 15,000 to 20,000 visitors, representing about 25 percent of the nearly 100,000 people who take Sundance’s scenic lift rides during the summer. The resort offers a Full Moon ZipTour, and the zip line will be open throughout the entire year.

Other summer activities added to the resort include a treetop canopy tour, mountain biking, horseback riding, and hot air balloons.

In Wisconsin, the Milwaukee County Zoo opened the Sky Trail Wisconsin Adventure Zone, a three-story ropes course including obstacles such as zig-zag beams, cargo nets, and rope ladders. There is also a 500-foot zip line that gives riders a treetop view of the zoo, and the Sky Tykes course, designed for children 2 to 7 years old. Prices are $10 for the ropes course and $6 for the Sky Tykes course, while the zip line is $12. Zoo admission is extra.