You are at:Home»Park Briefs»New Adventure Course Park for Fields of Fire
By Troy Hawks on July 28, 2015 Park Briefs 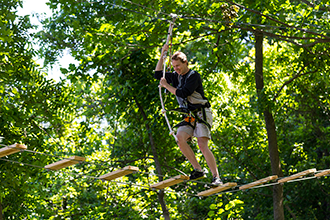 An “Indiana Jones” bridge at Fields of Fire.

Adventure courses, it seems, complement a wide range of other attractions. Including paintball? Tom Vignato, owner of the 50-acre Fields of Fire paintball park in Mystic, Conn., thinks so. He recently built a five-trail aerial park as phase one of a multiple-stage project at Fields of Fire. In the future, the aerial attractions will incorporate an “Ewok” village—a series of treehouses deep in the woods that can be rented out.

Tree-Mendous Adventure Parks designed and constructed the park, which includes zip lines of varying difficulty and elements such as “Indiana Jones” bridges and Tarzan swings. In keeping with the Tree-Mendous philosophy, only natural materials such as Eastern White Cedar and Black locust were used. The park at Fields of Fire will accommodate 300 to 400 adventure seekers a day, but if it proves popular, Vignato says as many as 15 more courses could be added.