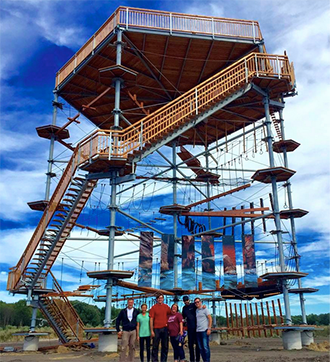 In mid-August, the SOAR Adventure Tower debuted in Franklin, Tenn. This full-size tower, the company’s first in North America, measures 92 feet x 105 feet and is 50 feet tall. It includes nearly 110 challenge features on its four levels, including 19 children’s elements.

In late September, Rugged Adventure, a new 50-acre fun park in Winamac, Ind., that also boasts archery tag, laser tag, bubble soccer, and a purpose-built Zorbing hill, opened the first KristallTurm mini tower in North America. It has a footprint that measures just 46 feet by 52 feet—a quarter the area of a full-size tower. Yet it offers 36 challenge elements, including totem poles, a canoe, and scenic panels. Rugged Adventure has added a QuickJUMP free fall to the tower, and plans to add a zip line in the near future.

The 50-foot-tall mini tower features three levels with an observation platform on the top deck. It can accommodate 50 guests simultaneously, and only requires two to three staff people to operate at full capacity. Average climbing time in the tower is 60 to 90 minutes.

Both the new attractions have received ASTM certification. In Tennessee, the inspection was performed by Avrine Wheelock; in Indiana, by Todd Nagy.

KristallTurm now has four installations (the other two are smaller versions of the mini) in North America, with another six already scheduled to open in 2016.