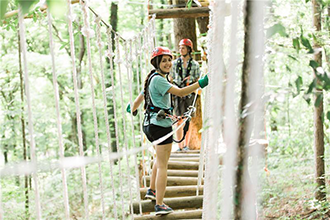 The horizontal logs are suspended from vertical cables.

The canopy tour at Ijams Nature Park in South Knoxville, Tenn., will remain closed following the death of a Georgia teen, Gregory Horan, 18, on July 29. State inspectors suspended the operating license of the course, citing safety issues. The Ijams course, with multiple courses and zip lines, had just opened July 17.

Horan was injured on a ropes course at the park on July 24 after he slipped off a suspended log step and was found hanging from his safety lanyard, which was wrapped around his neck.

According to a police report, the 18-year-old victim was on the course with his sister. She was about three platforms ahead and told officers that when she looked back she saw her brother suspended in the air, hanging by his throat by an apparent loop that formed in the harness system. Staff members arrived a short time later and began performing CPR.

Ken Stamps, CEO and managing partner at Navitat, which runs the canopy tour, said the feature the victim was navigating is a snake element about 12 to 15 feet above the ground that includes horizontal logs held up by vertical cables. Guests move from log to log while wearing a safety harness. Stamps said the victim, like all guests, had undergone safety training on the proper use of the equipment.

Prior to the park’s opening, it had been inspected by a licensed Tennessee engineer and an Association for Challenge Course Technology certified inspector. However, a third-party inspection this week uncovered problems both with the design of the safety lanyard and the height of the safety line.

The latest inspection, by North Carolina-based Challenge Design Innovations, said the design of the safety lanyard used posed “an increased risk of trapped head/neck during a fall and increased risk of compromised airway in such a fall,” according to its report. “The combination of the specific lanyard, extension sling, harness and patron height/build may have prevented the harness from bearing the weight of the patron during the fall,” the report adds.

“The inspection report indicates the device in question is unsafe and inoperable,” the Tennessee Department of Labor & Workforce Development said in a letter ordering the adventure course to close temporarily.

The letter added, “Your company is required to cease operation until the device is safe and operable, hazardous or unsafe conditions are corrected, a re-inspection has occurred by a qualified third-party inspector, the qualified third-party inspector has determined that the amusement device and all related equipment is safe for public use, a re-inspection report is submitted to the department, and the department determines that the company may resume operation.”

“The thoughts and prayers of the entire Navitat and Ijams families have been, and will continue to be, with the family and friends of Gregory Horan,” Navitat said in a prepared statement. “We are devastated by this loss. Navitat continues to work in full cooperation with the state of Tennessee, ACCT-certified inspectors, and other industry experts in analyzing the events that have transpired and charting a course of action going forward.”