You are at:Home»Park Briefs»Fertile Myrtle
By Troy Hawks on March 31, 2015 Park Briefs

More than $4 million will be invested in creating a “natural high” on the south end of Myrtle Beach. Scheduled to open June 15, the Radical Ropes Course Family Entertainment Center will feature zip lines, aerial challenges, and Sky Rider bicycles. The ropes course is being constructed by Experiential Systems of Thorton, Ill. 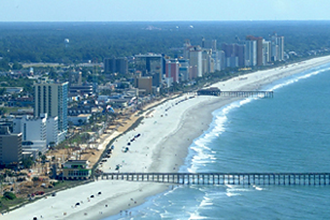 Officials from the South Carolina Department of Parks, Recreation and Tourism say the park represents the theme of a “natural high” by offering gravity-powered attractions along with more nutritional concessions such as cold-pressed juices, gluten-free food, and snacks.

Other attractions include a low ropes course fashioned after a pirate’s ship for younger users, a mini golf course, and rowboats for paddling around the property’s perimeter. Its anticipated that the park will create 12 new permanent jobs and about 36 temporary positions.