You are at:Home»Park Briefs»Court Rules in Favor of Mountain Ridge Adventure
By Sarah Borodaeff on October 26, 2016 Park Briefs

The municipality of Glenville had claimed that Mountain Ridge Adventure owners Michael and Olivia Cellini were required to obtain an amusement park permit from the Town Board before the park opened to the public. Had town justice Jennifer McPhail found in favor of the town, the Cellinis would have had to pay a fine of $250 per day, retroactive to the business’ grand opening back in June. 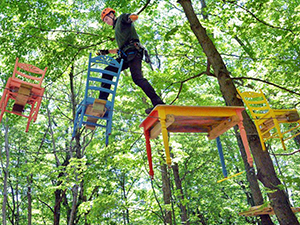 A unique element at Mountain Ridge Adventure in Glenville, NY

The Cellinis had obtained an operating permit from the New York State Labor Department prior to opening, and asserted that was sufficient.

The crux of the case rested upon whether a zip line is considered a mechanical device, thus falling under the classification of “amusement device.”

“The court finds that there is a lack of proof setting forth that because the zip line trolley has wheels, it becomes a mechanical device as it would be intended by the town of Glenville code,” McPhail wrote, adding that evidence presented by the town didn’t prove definitively that Mountain Ridge “operated mechanical equipment exclusive of equipment ordinarily classed as playground equipment,” as outlined in the town code.

The town has opted not to appeal the judge’s decision.