You are at:Home»Park Briefs»Boone Creek Outdoors Gets Green Light from County
By Sarah Borodaeff on November 1, 2016 Park Briefs 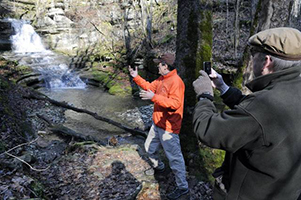 Boone Creek, which is run by Burgess Carey, was ordered to cease offering canopy tours in 2013. According to the motion for the injunction, the company was violating a conditional-use permit that was granted in 2000 for Carey to start a fishing club on his property.

Carey is not able to open for business yet. However, the zone change now goes to the Lexington Urban County Council for final approval. The council has 90 days to vote on the zone change and another public hearing can also be held in front of the council.

As a result of Carey’s efforts, several changes have been made to zoning ordinances in Fayette County to make it clear where adventure and recreation businesses can operate.

There are currently seven zip lines on the property, with plans calling for eight and a children’s area with low ropes for kids who are not tall enough for the traditional canopy tour.