When clocks were pushed forward in March of this year, it seemed as if the world skipped over daylight savings and jumped right into the Twilight Zone. In the early spring days of the pandemic, many park operators no doubt envisioned the upcoming summer season as a dystopia right out of the Rod Serling playbook, with customers and staff needing to engage in all sorts of convoluted behavior to avoid the infective scourge of the pandemic. Business would be restricted at best, and possibly shut down.

To be sure, business as usual was not the order of the day in the summer of 2020. Yet after pre-summer anticipation of a possible onslaught of misery and red ink, many parks were, perhaps surprisingly, able to run relatively smoothly, successfully, and even profitably. That, at least, was the scenario painted by a select panel of park owners and operators in an Adventure Park Insider Huddle conducted in early September, “The Good, the Bad, and What We’ve Learned” (Episode 47 on the PodSAM list).

HOW BAD COULD IT BE?

Destination decline. Start with the Bad first. Parks hit hardest by the impositions of the pandemic were those whose customer base comprises primarily destination travelers, as air-travel-reliant destinations declined precipitously. Nick Thompson, owner of ClimbWorks, which operates parks in the Southeast U.S. and Hawaii, reported a 70 percent drop in visitation at the Hawaiian location. With Hawaii closed to outside visitors, the park slashed prices and relied on local traffic to (hopefully) meet a baseline of financial viability. Thompson conceded that the whole idea of making money had basically been tossed out the window. “We weren’t trying to make a profit, but just trying to take care of our support team,” he said, in an effort to retain valuable talent for future operations.

Staff shortages. In fact, one of the biggest challenges for park operators as they slowly began opening in spring was staff retention. Generous unemployment benefits, said Rachel Maestri-Hailey of Zoar Outdoor in Massachusetts, discouraged some staff from returning. “We were starting with fewer guys than we had originally counted on … We’ve been chasing the staffing a little bit this season.”

Lori Pingle, owner of ZipZone Outdoor Adventures in Columbus, Ohio, had a similar experience. In a typical year, ZipZone might expect about 80 percent of the park’s staff to return from one year to the next. Not so in 2020. 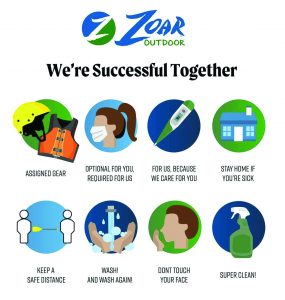 Communication with guests about rules and restrictions was daunting at first, but became easier as attitudes and expectations evolved. Shown here: Zoar Outdoor signage.

Pingle said that of the 14 staff members who agreed in March to return for the summer, just four were still on board by the middle of May. One reason for the decline, she said, might have been that people for whom working at the park was a second job “didn’t want two exposures.” Whatever the reason, the bottom line was that “staffing has been extremely challenging,” with Pingle herself filling in from time to time and staff training being an ongoing process throughout the summer. “It’s just been endless frustration,” Pingle said.

Managing the mask mandate. Finally, there were initial issues with customer acceptance of new protocols either imposed voluntarily by park operators or mandated by state or local authorities. Upon opening in the spring, said Kurt Damron, CEO of Highlands Aerial Park in North Carolina, “no one showed up wearing a mask.” That presented a “delicate situation” in trying to convince everyone to comply with a mask requirement, especially given that some of Damron’s customers were “in the 100 percent dedicated no-mask camp.”

HOW GOOD COULD IT BE?

Masking up and marketing. Yet masking turned into one of the positives of this past summer, as customer attitudes evolved to a widespread willingness to abide by and even appreciate the safety measures taken by parks. John Hines, owner of The Adventure Park at Sandy Spring (Maryland), said that, of the thousands of park visitors this summer, just three were sent home for not masking. The park made its stand on masks very clear, and that helped earn the trust of the vast majority of guests.

Others echoed that sentiment. Damron reported that by mid-July, 95 percent of park arrivals had face coverings, and that resistance to masking was essentially non-existent “as mandates became more widely accepted.” 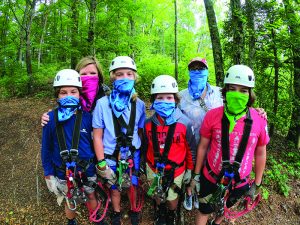 Logoed face coverings, of course, produced a new marketing opportunity. Damron ordered 2,000 logoed bandanas to pass out to customers who arrived maskless; the supply was exhausted in a four- to six-week period.

A love of gloves. Several park operators said that the sale of gloves actually produced an unexpected windfall. Hines offers guests an inexpensive glove for free, though it was not prominent in the park’s marketing. What was prominent was an upsell for a few different types of gloves. Hines reported “selling four times more gloves than I sold last year,” which more than paid for the free gloves the park handed out. “My bottom line is improved as a result of it. We’ll never go back to community gloves,” Hines declared.

Pingle offered a glove for $5 and had no resistance from guests; she buys the gloves from Amazon for $1.70. “People love the gloves,” she said. “They are much more form-fitting than the gloves we were using, which were a partial finger glove. And this is a full finger glove, so we have fewer injuries on people’s hands.” Like Hines, she plans to make the glove switch permanent.

Online booking gains acceptance. Another positive development brought on by the pandemic was customer acceptance of the shift to online booking. Damron reported that “online bookings skyrocketed,” and Hines said that online sales were so successful that “we’ll never go back to cash again.” Cashless operations, he said, resulted in enormous savings both in time and headaches.

Attendance better than expected. All of the panelists reported declines in customer capacity, driven largely by mandated limits on gathering sizes. Maestri-Hailey said that Zoar operated at about 50 to 60 percent of normal capacity, with Pingle citing a similar figure. Hines said that the 800 to 900 people he might normally expect on a Saturday was reduced to about 350. On the upside …

Weekday business grows. While capacity limits might have reduced weekend business, weekday business, typically much slower, thrived. Hines noted that weekday visits in July and August were stronger than ever before. Thompson saw a longer season into late August, with a slower drop-off than in past years. Pingle noted that even though maximum capacity was 50 percent of normal, overall visits had declined just 27 percent for the month of July.

Pingle said that her midweek business was constrained only by staffing shortages as well as the time needed for facility and gear cleaning. Thompson, for one, addressed the second issue by simply ordering more gear “so we didn’t have to rotate it so quickly.”

Combining work and play. One of the creative ways that operators were able to make the most of limited capacities was to build work stations, where parents could work while kids were engaged in an activity, then kids could do schoolwork as parents went off to play. In some cases that meant bringing electricity to picnic tables and cranking up the wi-fi, but the investments enabled larger overall participant numbers by offering a needed convenience to make the most of capacity limits. 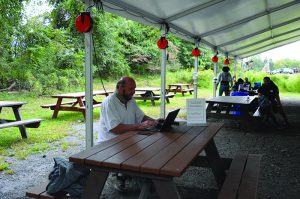 The Adventure Park at Sandy Spring added power and wi-fi to its covered picnic area.

Guided tours. Thompson also found guided tours at his Lumberjack Feud operation were a hit with guests. “We had two guides take guests around to everything that we were doing. It was a way that we could still run all the different activities with a low staff. That location had only opened in September last year, and people really liked that guided experience. It got us great reviews, and showed us another way we can run the adventure park” when it has fewer visitors or reduced staff, he said.

Pricing power. To counteract weekend shortfalls, some parks upped their prices, only to encounter minimal customer resistance. When Hines raised prices, “nobody blinked,” he said, so he instituted a second price increase. Some weekend customers expressed appreciation for the lack of crowds, suggesting that the combination of higher prices and lower participation limits might be a sensible long-term business model, maintaining overall revenue while improving the guest experience. 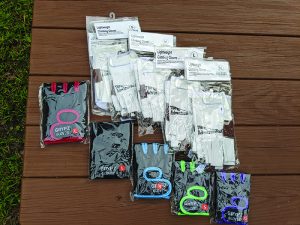 Thriving drive markets. Operators of parks relying on drive traffic benefited from the various COVID mitigations. “We saw [increases]in our summer numbers at all three of our attractions in the Smokies,” said Thompson, mostly due to the boom in weekday business. The demand was sparked by the steep decline in air travel and the allure of fresh mountain air (“We need to get to the mountains, because COVID doesn’t live there,” is the way Damron described the prevailing attitude) as well as COVID-driven slowdowns of other recreational activities, such as youth sports leagues and summer camps. Parks weren’t the only outdoor-recreation game in town, but there were fewer competing options than usual.

“The diversity of the customer base has profoundly changed,” was Hines’s summary. He added that many of the newcomers returned for a second visit, and relatively close to the first visit, compared to previous years.

“One of the things we saw as a positive was an increase in diversity,” echoed Maestri-Hailey. “We talked a lot about diversity, equity, and inclusion for these new folks coming in.” While more diversity might have been a social positive, it also presented a significant business opportunity, with the adventure-park net cast across new audiences. 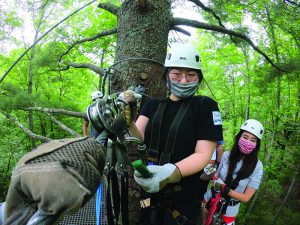 First-hand experience with staff. One benefit of being short-staffed was spending more time with guides and observing operations up close. “I haven’t been running tours in like five years,” said Pingle. “There’s a ton of value in somebody at my level getting out there and being in the adventure park for three hours and watching what the staff are actually doing.

“There was a lot of stuff that I got to do, guiding tours again and chatting with guests. It’s all stuff that I do not want to do, but being forced into it has given me a new perspective, and I get to have some comradery with staff that I don’t always get to have. It’s been great to kind of get back in the trenches with everybody.”

Cross-training of staff. Maestri-Hailey highlighted the need for, and benefits of, cross-training, which helped Zoar meet demand with limited staff. This also gave staff a chance to take on more of a leadership role, which prepares the park for the future.

Whatever impact COVID-19 might have had on a park’s bottom line, the jolt of this summer’s changes has spurred many operators to seize it as a cathartic opportunity to review all aspects of the way they do business. Operational procedures, staffing, retail sales, marketing, etc. “It really made us look at every part of our business,” said Thompson.

As it turned out, the Twilight Zone of the summer of 2020 might actually have turned into an opportunity zone for many. It opened new markets, enabled price increases, and introduced operational efficiencies that will outlive the pandemic. In other words, the Good appears to have outweighed the Bad, and, for the long term, parks should be the better because of it.