You are at:Home»Articles»Park Briefs — Winter 2019
By The Editors on January 10, 2019 Uncategorized

Registration is open for the 16th annual Professional Ropes Course Association (PRCA) Conference and Expo. The event will take place March 7-10, 2019, at the Holiday Inn Tampa Westshore in Tampa, Fla.

The planned events include both a Qualified Instructors Certification Workshop and Instructor Training Certification in addition to 10 to 15 workshops covering professional development, outdoor education curriculum development, facilitation and team building for zip lines and aerial adventure courses, and more.

PRCA will host its annual public board meeting and public membership meeting at the event, as well as an ANSI/PRCA Consensus Group Meeting to discuss the ANSI/PRCA standard and submit it for reaffirmation in 2019.

In addition, PRCA will be hosting an ASTM F24 Amusement Device F2959 exclusions task group meeting at the conference (see related story, p. 12). The exclusions task group was established after ASTM tabled a ballot item to remove the exclusions from the ASTM F2959-18 standard. The change would bring educational, camp, therapeutic, and other programs under the scope of the F2959 aerial adventure standard. The task force will seek to develop new language to be balloted by the F2959 subcommittee and F24 committee in October of 2019.

Members and non-members are invited to attend the conference. Special hotel rates are available for attendees, but must be booked by Feb. 8, 2019. For more information on the conference and certification workshops, visit www.prcainfo.org. •

Virtual reality remains hot, netting and ninja features are on the rise, and the International Association of Amusement Parks and Attractions’ IAAPA Expo continues to grow. The annual event filled the Orange County Convention Center in Orlando, Fla., Nov. 12-16.

Virtual reality has been big at IAAPA for the past several years, and there’s now something for everyone—though males, adolescent and adult, are the main targets. VR is showing up in more activities, too; coaster company Wiegand incorporated VR into one of its rides.

Even so, active and participatory attractions were drawing crowds, too. As usual, the Ropes Courses Incorporated booth, all 5,000 square feet of it, displayed the company’s latest innovations, including a 180-degree curved Sky Rail and a Sky Tykes course complete with its own Sky Rail. More than 1,600 participants interacted first-hand with the two-level course and the Clip ’n Climb climbing walls, according to RCI, and many thousands more watched them.

Adventure Solutions’ ninja course also drew lots of onlookers and participants, including one in a T Rex costume who starred in a viral video from the show. That set-up, and netted attractions generally, were regular sights in the hall. Treetop Trekking was showing new nets made by a fishing supply company in Brittany, France. The nets are incredibly strong and durable, and come in several colors.

A notable entertainment development, Mountain Mile in Pigeon Forge, Tenn., displayed its plan for a major retail/hotel/restaurant/adventure/entertainment complex. The tentative plan includes 70+ acres of to-be-determined aerial adventure alongside a recently built $22.5 million baseball complex, in a locale that sees 15 million or so visitors a year.

Otherwise, IAAPA was full of its usual array of amusement park rides, food, knick-knacks, arcade games, water features, and inflatable slides, play structures, and bounce houses. One exception to the usual was a 10-foot-high bounce house in the shape of the smiling pile-of-poop emoji, which drew plenty of attention.

A participant flies over the trade show hall on RCI’s curved Sky Rail.

For all that, several exhibitors felt the show was less busy than previous years, despite a record number of both exhibitors and buyers (26,600 of the latter). The apparent lack of energy may have been due to a new Exploration Station hall outside the main convention hall; the Station, housed in two large tent structures, seemed relatively energetic and upbeat compared to the main floor, and helped spread out the crowd.

This kid’s face says it all. 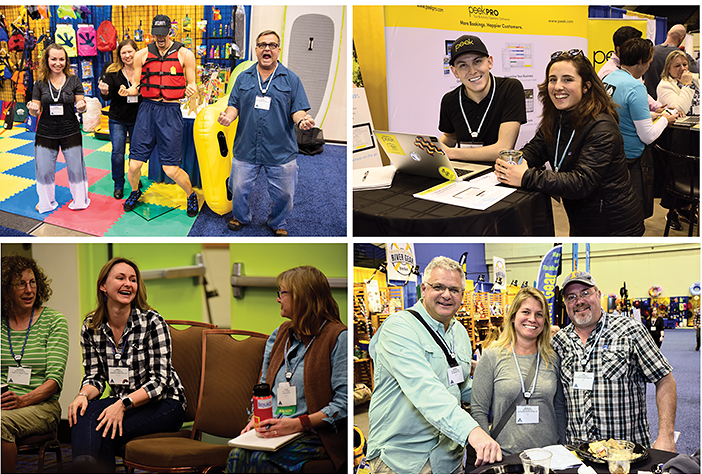 Will the ASTM F2959 standard expand to include more traditional operations and programs? The F2959  Aerial Adventure Course Task Group, and the larger F24 Committee, are moving on several fronts to evolve the standard and accommodate the concerns of all members of the industry, and at the same time to raise the level of safety for consumers.

At its October 2018 meeting, the F2959 task group tabled the ballot item that would have removed the exclusions to the F2959-18 standard, for a period of one year. But F2959 will take up the exclusions language again at its next October meeting. Further, the F2959 task group continues its work to improve/revise sections on braking, containment/harness, wire rope, geotechnical and more. A separate effort, to explore the harmonization of the ASTM/ACCT/PRCA standards, is also underway.

The exclusions decision “was based on feedback from the stakeholders that participated in the meetings, but comes with the caveat that these stakeholders should work to identify areas in F2959 that need to be revised, and submit those items to ballot during this timeframe,” said Jared Krupa, chair of the F2959 Aerial Adventure Course Task Group. “It is the responsibility of any member or interested stakeholder to identify these items and do the work to get a ballot item together.” The exclusions task group is headed by Jeff Borba of Precisioneering, with PRCA’s Mike Barker serving as stakeholder lead.

What language is acceptable?

ACCT policy director Scott Andrews is optimistic about the process. Andrews is a member of the F2959 task group and is working on the harmonization effort. ASTM, he said, recognized that some aspects of F2959 “don’t really work for the traditional portion of the industry. So how do we fix it so it works for everyone? It’s a good approach, as it could really make the ASTM standard more useful,” he added.

Krupa reminded Adventure Park Insider that any eventual changes to the standard will apply only to new or revised/updated equipment and installations. Most existing installations would be grandfathered. ASTM F2959 section 1.3.5 states that the standard only applies to aerial adventure courses installed after the standard’s publication date—as long as pre-existing designs are service proven or previously compliant.

The exclusions task group is one of several smaller focused task groups within the larger F2959 task group that are addressing specific sections of the standard, among them operations, maintenance, design, manufacturing, Authorities Having Jurisdiction, and third party inspectors. Each task group has four to six members. The groups hold working sessions as needed, and report regularly to the full F2959 task group.

The harmonization task group continues its efforts as well. This group was formed with representation from ACCT, PRCA, and F2959 to review the three standards and identify gaps, with the goal of having a list of differences and beginning the process of balloting needed revisions in order to fully harmonize them.

This effort could help the industry evolve. “I’m really excited about the work that’s being done,” said Andrews. “We’re getting a better view of the industry by evaluating three different systems. All address public safety, just from different viewpoints and mechanisms of addressing the risks. They all help us develop practical systems for increasing instructor judgment.”

The upcoming ASTM F24 meeting Feb. 13-16 at the Hyatt Regency Houston will show just how much progress has been made toward that and other goals.•