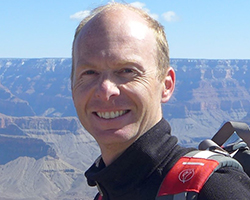 Being outside, “it’s a balm,” says Vernon West, pictured here at the Grand Canyon.

When Vernon West acquired Go Ape’s 14 U.S. adventure parks in early 2019, he was looking for a business venture that aligned with his values and had the potential for positive impact. “It was a really good fit for me,” says West, a former hedge fund CEO. “It was an opportunity to have a great impact serving people, and it is also a business that aligns closely with the things I care about most—encouraging people to learn how to take risks and manage those risks.”

Go Ape, like West, migrated from the UK to the U.S. It opened its first U.S. park in 2010 in Maryland and now has locations in 13 states. The brand is focused on doing good, not just doing business. Go Ape parks operate with a unique, community-centric business model: The facilities are all private/public partnerships built in public city, county, or municipal parks. Go Ape provides an initial capital investment to each “park partner” for a course, and designs, builds, and operates the park. Partners pay nothing but receive a percentage of each ticket sold to reinvest in their communities.

When West learned about the possibility of purchasing Go Ape’s U.S. operations, he believed he could make it a better business. As the founder and chairman of nearly 20 trampoline parks and spin studios in his home country, West was no stranger to the leisure market. The Stanford Business School grad had also invested in the consumer sector for years as the CEO of Skyline Capital Management.

West identified several major drivers at Go Ape that needed attention. Among them: raising the e-commerce conversion rate, spend-per-head, and right-sizing the cost base. This trifecta became his main focus.

Improving conversion. An earlier website “lift and shift” project that migrated the company’s data from one host to another had resulted in a high-friction e-commerce customer booking experience. West’s team focused on web actions geared toward smoothing that process and increasing conversion. This involved adding calls-to-action “above the fold” in the right colors and optimizing the booking funnel to reduce a step, resulting in fewer dropouts. The team also tested different text, image, and merchandise placement options.

On the marketing front, more emphasis was placed on return on investment. A threshold of a 2x return on ad spend was introduced across paid search and other digital marketing efforts, including non-branded, display, and all Facebook campaigns. That minimum threshold was increased by campaign and season. Tracking of sales conversions was also correctly calibrated digitally, and return tracking was implemented for local guerilla marketing campaigns, ensuring Go Ape’s marketing team had the data to justify the spend.

Spend-per-head. These efforts to improve the sales conversion rate trickled down to priorities two and three, most notably, customer spend-per-head. West’s team managed to quadruple ancillary sales companywide from an average of about 3 percent of activity revenue to about 12 percent. This was accomplished through a variety of new merchandise and F&B options. Merchandising changes included branded cups and Buffs and a greater range of glove types and sizes. F&B options were tailored to the sites, too, such as offering Gatorade for sale when guests were hot, which wasn’t being done.

Most of these additions came from simply observing customers’ wants and needs. “We’re serving more previously unmet needs in terms of providing products that people find valuable as part of their experience,” says West, while also making money.

West also aimed to expand the parks’ attractions. When it came to features, West says Go Ape’s parks were about “half built.” That is, they offered plenty of components for adults but not enough for youth. Most sites had a treetop canopy course, but few additional options. “Building a treetop course without an easier product is akin to launching a half-built park,” says West. “You don’t get many kids, and you hurt your conversion rate for larger groups.”

Entry-level activities. West’s short-term goal was to create adventure centers from existing footprints, with a focus on outdoor adventure centers that transcended typical treetop activities. To do so, Go Ape Treetop Journeys were added to the two-thirds of park locations that didn’t already have one. The Treetop Journey is a one-hour introductory high ropes course experience focused on getting visitors off the ground and into the trees. It includes three loops that increase in difficulty, as well as aerial bridges, nets, and planks. The idea behind the activity is to get all ages comfortable with adventure.

Ready for expansion. Having built out the business, the company is now eyeballing new locations and opportunities. In the long run, West envisions Go Ape as an outdoor lifestyle brand with enhanced adventure centers and increased density in big markets like Washington, D.C., and Dallas, where perhaps there could be two or three parks, not just one. “If we increase our density, not only do we have a fantastic commercial dividend, but we create an aspirational lifestyle brand,” West says.

Consolidation is also on West’s mind. He anticipates that the industry will see a number of operators offloading in the future. “A lot of the guys who were at the top of their game have been in the sector a long time, and clearly had moments this year in which they worried about their business,” says West. “That tends to lead to change in mindset in terms of what people want for the future.”

This wouldn’t be forced consolidation, West clarifies: “This is not like an indoor operator running out of money. I think we’ll see a bit more, ‘I want to take some cash off the table because I’ve been doing this a long while, and we’ve had a year that’s been kind of challenging.’”

Gear hangs ready to use in the Chicago, Ill., Go Ape park.

Room to grow. West believes there’s a lot more opportunity for growth in the U.S. adventure park sector. Its penetration-per-capita is significantly lower than in the UK, he says, and lower than other leisure markets, like movie theaters. He expects to be on the consolidation train. “We don’t want to do any more pruning, what we would like to do is infill,” he says of Go Ape’s strategy. “We want to leverage the platform around geography. This might be opening new sites, and it might be consolidating.”

He also predicts a bit more outside interest from private equity. “They have not historically been a player in the sector, but I would expect them to be a player in the future for a number of reasons,” he says.

As with many operators, shutdowns in 2020 during peak season negatively affected Go Ape’s U.S. operations, which center on the East Coast, particularly Washington D.C., the Mid-Atlantic, and the Midwest. Late season 2020, though, was relatively good, and 2021 has been good, too. Ultimately, West predicts several pandemic silver linings.

“I think there’s a fork in the road, and the role of outdoor within the disposable dollar [spend]is going to be up structurally,” he explains. “Clearly there’s some switching because it’s now safer to be outdoors than indoors, but having consumed outdoor, having gone to Go Ape and other outdoor ventures, many consumers will conclude that this is a pretty fun thing to do.”

Cashless and close to home. There are other trends West anticipates will stick around, at least for outdoor operators. For one, cost reduction in the form of going cashless. “Many of us have gone cashless, and I don’t think there’s any going back,” says West. “That’s an ongoing savings and takes stress off staff.”

Consumers’ desire to stay close to home is another trend West is keeping his eye on, for several reasons. One, emerging market destinations received the vaccine later than America. Meaning, Americans may be less likely to head abroad. There’s greater travel friction in general, even as limits on international travel ease. These issues likely will not unwind immediately. “Also,” says West, “people may decide that doing things closer to home has some benefits: It’s been cheaper; it’s low stress.”

This time of the Great Unknown has caused a lot of stress. There’s been more depression. Nature may be the antidote, which provides its own opportunities.

“We know from the research and our own personal experience that being out in nature is wonderful, it’s a balm,” says West, who grew up in a 16th Century farmhouse surrounded by fields in Essex, England. “People are reconnecting with nature. Not people like us, but the 80 percent of the population that’s urbanized. They’ve probably connected to nature in a way they haven’t done for years, and I think that will awaken something.”

For Go Ape, that means a conscious approach to upgrades and new features, even with a trend toward attracting younger markets.

“Part of the outdoor proposition is nature immersion, and nature immersion is always reflective, it’s always been calm, being in the moment, observing,” says West. “There are lots of ways to make money, the question is: Is the proposed way fitting? Is it philosophically right? Is it in tune with your values and culture and what you are representing?

“Even if we end up, say, having music some nights, we’ll still have quiet nights in the dark, because when you’re out there on the edge of the forest, and it’s dark and quiet, it’s quite a lonely experience, and that feeling is something that I like,” he says. “I like that we can produce that feeling for people.”