You are at:Home»Park Briefs»Alaska Ropes Course Sitting in Limbo
By Troy Hawks on May 7, 2015 Park Briefs

A ropes course and other activities in Juneau, Alaska, may sit idle this summer due to lax management. The city has taken over temporary management of the Eagle Valley Center after the Southeast Alaska Guidance Association (SAGA) stopped operations amid financial difficulties. SAGA has been managing the city-owned center since 1992.

The city has since assumed control of the center, but Duncan said it won’t be running any programs. “The city is hard pressed to take on any new obligations without adequate funding,” Duncan told the Juneau Empire.

A private operator, though, could change that. Duncan said it’s a good asset to the community, and he’s open to the idea of the city partnering with an organization for management. 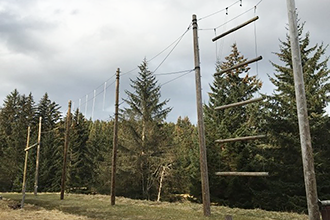 The poles and cables.

“The poles and the cables are still in the ground and in the air,” Duncan said. “So if somebody came to me and said, ‘We want to manage the ropes course. We will provide the equipment. We will market it. We want to operate it. We have adequate insurance. We have people that are trained.’ I’d be all over it.”