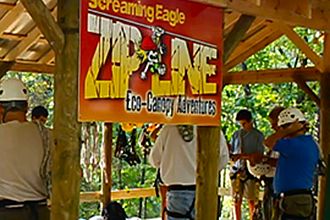 Mike Holder, founder and owner of Screaming Eagle Adventures in Banning Mills, Ga., has postponed plans to add four aerial adventure parks in Alabama this summer, at least until the state legislature sorts out its budget. Adventure Park Insider reported earlier that Holder and the state had plans for adding adventure parks at Wind Creek, DeSoto, Lake Guntersville, and Cheaha state parks.

The project has been in the works for more than a year. In March, Holder’s firm was awarded the contract to build the parks. But in June, after Alabama officials said that 15 of 22 state parks might close if a proposed state budget cut was approved, Holder put the project on hold. Work had already begun on the Lake Guntersville park when the budget impasse arose.

Holder said he intends to move forward with the project, but he’s waiting for the legislature to work through the budget talks to make sure the parks he’s planning to build in will stay open.