Ours is the story of a market that emerged from unlikely roots: military training, the green air movement, education, and human growth theory. Initially, challenge courses were designed to test the physical prowess and agility of individuals and small groups. Later they were adapted to support mostly educational, development, or therapeutic outcomes. Today, the market is a mix. While basic engineering principles remain constant across course types and structures, the philosophies, methodologies, and experiences are very different. 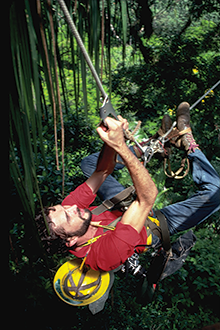 Dr. Donald Perry was the first to utilize and popularize zip lines as a means to explore otherwise undocumented reaches of the forest canopy in the early ‘80s. Credit: Dr. Donald Perry

At one end of the spectrum are traditional challenge course programs—intensely therapeutic, developmental, or educational. In the middle are programs that are purely recreational. At the far opposite end are elements designed to thrill and amuse, in which participants are merely riders, and the structure or operator controls the experience.

This is a look at how we’ve evolved, emerging trends, and future debates in the marketplace.

EVOLUTION OF THE CHALLENGE COURSE

Early high element courses “borrowed” the hardware and installation practices of utility companies. After realizing the forces imposed on challenge courses created unique stresses, the industry has since developed leading practices, new hardware, and guidelines for design, installation, and testing of materials. 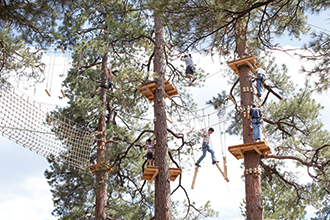 The look of the “challenge course” is ever expanding. The zip line canopy tour and aerial trekking course are two of the newest trends; the former evolving from techniques used to study of the upper rainforest canopy in Central America, the latter spurred by growth and development in Europe. A variety of other zip rides or zip line concepts have also recently entered the market.

Zip Line Canopy Tour/Zip Line Tours
While military and civil application of zip lines dates back hundreds of years, the commercial popularity of sliding down tensioned cables is relatively recent. There are many innovators, but Dr. Donald Perry was the first to utilize and popularize zip lines as a means to explore otherwise undocumented reaches of the forest canopy in the early ‘80s.

His innovations in tree climbing and high-wire rigging are the foundation of many techniques used today to install and operate zip line canopy tours. Many credit his research, awards—including the 1984 Rolex Award for Exploration—and publications with the popularization of the canopy tour and the growth of eco-tourism. Money from the Rolex award was used to develop one of the first aerial trams used to study and provide commercial access to the rain forest canopy. When his work appeared In Newsweek, Life, and the New York Times, use of zip lines and tree climbing entered the mainstream.

Joaquin von der Goltz of Rain Forest Adventures (first tram installed in 1994), and Darren Hreniuk of the Original Canopy Tour, are among other innovators in the early 1990s. Early tours began appearing in Mexico at the turn of the century and in the United States and Canada in 2003. Since 2005, the industry has grown by double digits each year, according to zip-lines.com.

Aerial Trekking Courses
Aerial trekking courses (aerial adventure parks, treetop trekking, treetop obstacle courses) are an offshoot of the traditional challenge course. Innovations made in Europe from the late 1990s forward, largely sparked by regulation, led to the development of high-volume commercial courses. Many of the elements are analogous to traditional challenge courses, but participant lanyards and life safety systems have been engineered for high throughput and minimal staff.

Most pay-to-play aerial trekking courses are designed to allow users to move through under their own power at their own pace, and the focus of the operation is on novelty and recreation. Despite the presence of some gravity-fed elements, user input is required, which many advocates say differentiates commercial aerial courses from amusement park devices.

Large-scale commercialization first reached Quebec in 2002, and has quickly spread to the United States. New hardware, belay systems, and installation techniques—funded by commercial growth and private equity—have led to larger parks, increased visitation, and increased regulation. Growth trends for aerial adventure parks are expected to exceed zip line canopy tours for the foreseeable future, in part due to the amount of land required to install a zip-line attraction.

Zip Rides & Rail Zips
New zip-line concepts are emerging that test the very definition of zip line. From rides that span more than one mile to systems that utilize hybrid trolleys to propel riders along a span of cable with zero or positive slope, it is no longer clear whether the term “zip line” requires a flexible lifeline system or that the rider must descend by means of gravity alone.

Further adding to the confusion is something we’ll call rail zips, in which harnessed riders descend a length of bent rail or steel tube, allowing for designs with drops, climbs, articulated turns, and spirals.

Some designs allow riders more control of their speed and direction; others are designed to remove rider input from the system altogether. The lack of user input and the popularity of such rides have further anchored these rides in the category of amusement park device.

Free Fall/Swing/Jump Concepts
A variety of new swing, free fall, and jump concepts have entered the market in recent years. Propelled by new technology that allows for a controlled descent of the participant following a free-fall experience, the size and scope of many of the new designs are beyond concepts previously imagined.

Jumps and free fall concepts are often used as a means of egress from aerial courses and zip line tours, but they are also designed as standalone events, with drops sometimes as high as 100 feet or more.
Giant swings continue to be popular in the challenge course market, although many states have confined them to status as an amusement park device.

The Association for Challenge Course Technology (ACCT) was formally organized in 1993 by a group of practitioners, builders, and educators to set minimum standards for challenge course installation, operation, and management. Following eight editions, the current edition is ANSI/ACCT 03-2016 Challenge Courses and Canopy/Zip Line Tours Standards.

While ACCT Standards remain the most widely accepted in the U.S., several other standards that guide design, installation, inspection, and operation have emerged in recent years. Some regulators and pay-to-play ride designers have adopted ASTM F2959 Standard Practice for Aerial Adventure Courses, and those standards that reference the design, operation, audit, maintenance, and performance testing of amusement park and related devices. An alternative option in the U.S. is the ANSI/PRCA Standard, which covers ropes challenge courses, canopy zip lines, and aerial adventure parks. Outside of the U.S., a number of standards have developed, the most popular being the European Ropes Course Standards, EN 15567.

The dichotomy between adventure education and amusement, contrasted with the similarity of structures, is at the heart of many of the challenges the market is currently facing as policy makers, regulators, standards writers, and the general public work to balance public safety with the public good. Pervasive terms like “zip line” and “challenge course” are used to describe structures rather than potential outcomes. Central to this is a confused public that does not always understand what it is buying, or the risks they are exposing themselves to by participating.

Traditional-use operators and educators rightly fear over-engineering and blanket regulation will eliminate the multi-faceted benefits of structured experiences that expose participants to risk, and foster behavioral change. Balancing this is the need to eliminate unnecessary risks in situations, such as aerial adventure parks, where actual risk doesn’t contribute to the outcome of having fun.

Although it is impossible to know the future of the industry, several predictions can be made based on current trends.

Aerial adventure parks will continue to grow in popularity. Increased demand for leisure activities and opportunities to address society’s problems will lead to increased participant numbers and revenue. Large-scale commercial zip line canopy tours and aerial adventure parks have grown at a rate of 30 to 50 percent in the United States and Canada for the past decade. Growth of the commercial market will begin to slow until replaced with a new variant.

Current trends would suggest that the new drivers will be: 1) programs located in densely populated urban areas; 2) more extreme variants similar to American Ninja Warrior; and 3) an increase of more expansive indoor courses that can be operated year-round at lower cost.

Programs will be brought to the user.Users will continue to frequent desirable destinations and high-quality fixed programs. Eventually, programs will be brought closer to populated areas and become more mainstream. As a result, certain adventure experiences will be manufactured and presented in new ways, to make them more accessible to the masses.

The profession will mature through self-examination. Increased concern over litigation and loss of funding will force continuing research into leading practices and new applications. The environment will become more regulated. Increased popularity, a rise in publicized accidents, and increased exposure of recreational programs to liability claims will result in greater scrutiny by government regulators and policy makers.

Technology will become a driving force to mitigate risk. New technologies and design techniques including, but not limited to, the use of steel columns and structures, auto-belay devices, self-retracting lanyards, smart-belay lanyards, and continuous belay systems seek to reduce the manufactured and inherent risks associated with aerial adventure courses. New technology will evolve to address existing challenges, and tackle new challenges created by larger, more ambitious projects that serve greater volumes of users.

Increased popularity of pay-to-play courses will change the field. The use of steel structures, smart belay, and auto-belays in the design of challenge courses has made the field accessible to more recreational participants.

This trend will accelerate the need for practitioners to adapt programming and curriculum for high-paced urban environments. Zip lines, aerial trekking courses, and climbing walls will become as accessible as amusement rides, located at the local mall, family entertainment center, museum, or fairgrounds. While commercial pay-to-play courses account for a bulk of user experiences and revenue, they account for a fraction of the overall number of courses.

Increases to labor wages will be a disruptor. Wages will burden traditional programs that are staff-intensive and will popularize systems that reduce or even eliminate the need for highly qualified instructors. High labor costs will accelerate several trends: popularity of self-guided versus fully-guided adventures; the development of courses in densely populated areas; and more mergers and acquisitions. Ironically, increasing labor costs might be the main catalyst to falling ticket prices.

The aerial adventure park and challenge course markets present a wonderful story of growth, innovation, entrepreneurship, educational theory, and leadership development. The marketplace now finds itself in a period of immense growth. In coming years, there will be many chances for factions of the market to branch off or resolve to come together.

Probably most important in this dialogue—which will involve education of the public, regulators, policy makers, designers, and operators—is the need to differentiate between the structures common to challenge courses and aerial adventure courses, and to the different programming behind each.

Despite concerns about escalating standards and regulation, the future appears bright. We are constantly wowed by the experiences and structures being imagined and created. And we’re regularly reminded of the power that novel adventure experiences have by the smiles of participants who delight in it.