But peel back the layers, and you’ll see a larger, more developed center. One that encompasses a successful F&B operation, world-class whitewater rafting, lucrative partnerships with local activity providers, and a hub for new equipment.

Royal Gorge Zip Line Tours opened in 2011 in Cañon City, Colo., two hours south of Denver and an hour from Colorado Springs. Cañon City straddles the mighty Arkansas River, a major tributary of the Mississippi, and the area teems with outdoor pursuits.

Royal Gorge Zip Line owners Ty Feufer and Jimmy Whiteside first came to the area to run whitewater trips down the Arkansas; they founded Royal Gorge Rafting in 2004. It was later, while traveling with their families during the off-season, that they had a collective “aha” moment.

“They were rafters, and the rafting part started first,” says Bruce Brown, director of zip line operations and training for Royal Gorge. “But when they’d go on vacation, every place they went had a zip line course.”

Parlaying what they’d seen into their own business, Feufer and Whiteside launched Royal Gorge Zip Line with one course, the Classic. With nine zip lines spanning more than a mile, it drew 12,000 visitors the first year—much more than anticipated, says Brown. A second course, the Extreme, was added in 2012. 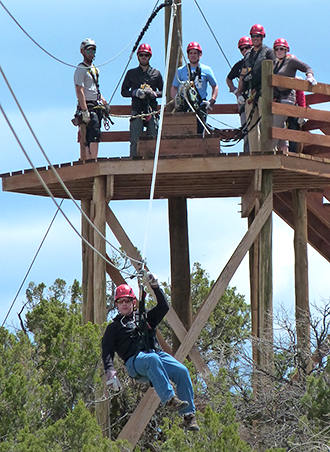 The 70-foot Extreme Tower is the receiving station for a 1,100-foot dual race line. Free fall devices are used to exit either side of the tower—Head Rush Technologies’ Flightline on one side, and its Quickjump XL on the other.

If the Classic Course is a blue diamond, the Extreme is double black. It offers 11 zip lines, the longest more than a third of a mile, with speeds up to 55 mph. The Extreme Course culminates with a 1,200-foot double race line followed by a mandatory belay or free fall from a 70-foot tower.

The Extreme Course has become a sort of archetype for the new free fall elements sprouting up at parks nationwide. Boulder, Colo.-based Head Rush Technologies found the Gorge’s lofty tower the perfect spot to test its new FlightLine free fall device, which was installed permanently on the course in February.

FlightLine, which will be rolled out to the industry this year, allows users to free fall 40 feet before it engages and lowers them another 30 feet to the ground. That’s a step up from Head Rush’s popular QUICKjump, which debuted in 2014 and offers a 25-foot free fall. Micah Salazar, Head Rush’s senior business development manager, says the company will be collecting data and producing videos from the Royal Gorge site to promote the new product.

Head Rush will also debut its first Adventure Tower at Royal Gorge’s sister course, which is slated to open later this year in Castle Rock, 30 miles south of Denver. The Adventure Tower will include a 42-foot climbing wall, four rappelling stations, and a 70-foot Eagles Nest platform with a Flightline device.