Whiteside and Feufer opened the Whitewater Bar and Grill in 2008. Having a restaurant to package with rafting tours was a boon, and when zip lines were added, they were included in the mix. With full-day packages of rafting/lunch/zip lining—or as just a spot to have dinner and listen to live music—the Western-themed restaurant remains the only food and beverage source on the grounds. It caters to locals in the town of 16,000 as well as tourists.

“It’s not a real big community, so everybody depends on everyone else to make the customer experience something that they want to come back for,” says Brown. “It’s competitive, but cooperative at the same time.”

Brown joined the Royal Gorge crew in an unexpected career move. A schoolteacher and sports coach for more than 30 years, he and his wife, a former school principal, moved from Denver to Cañon City upon retirement. Speaking from his patio overlooking Pikes Peak, he says he happened into zip line guiding, which was his job at Royal Gorge before becoming course manager two years ago. 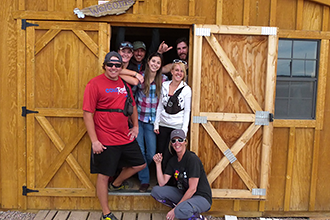 Brown’s background as a coach readied him for his new career managing seasonal employees. Royal Gorge employs 40 guides during the peak summer season, and Brown says the employee return rate is high.

As with all zip line operations, training is a priority. At Royal Gorge, it’s intense, with six 10-hour days, tests—both written and rescue-based—and on-the-course evaluation culminating with ACCT certification.

Until this year, Glenwood Springs-based Bonsai Design, which designed and installed both courses at Royal Gorge, conducted guide training. But the program was recently moved in-house. Along with a four-person team, Brown will have trained 60 guides for the Cañon City and Castle Rock operations by the end of 2015. Bonsai remains a collaborator and a third-party evaluator.

As more data about aerial parks and zip lines becomes available, it’s easier to prove that the activities pose minimal inherent risk, says Brown. Still, he and his crew are ready for the worst. “Training is all about preparing yourself for the thing that you hope never happens,” he says. “It’s because you’ll go an entire season and have nothing happen that you need to practice it.” To stay sharp, Royal Gorge guides spend two hours at rescue school every month, practicing their skills.