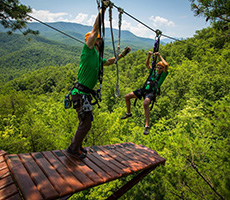 Zipping in at CLIMB Works

Though the operation is plenty busy—it was fully booked and turning people away in early August—its owners are always looking for new ways to tap into an estimated 90 percent overnight tourist crowd in this resort town, hankering for different things to do.

Working with other companies has proved a successful strategy, one that has advantages in a smaller, tourist-based economy. At CLIMB Works, marketing associate Andrew Wagner spends a good amount of time forming relationships with local lodging and dining establishments as well as other activity companies. He says partnerships are a key ingredient to success.

“I’ve always been a big promoter of partnerships with others,” says Wagner. “Each organization has its own mission and personality, and they focus on that. Hopefully they’re doing the best they can in the most positive way. When you can do that with your company, and then also have a partnership, the guest is always the beneficiary.”

With this philosophy, the company formed a partnership with Smoky Mountain Outdoors Whitewater Rafting three years ago. CLIMB Works clients were interested in rafting, and Wagner says Smoky Mountain Outdoors clients were constantly asking where to go zip lining. Now the two businesses work together to offer packages that include any combination of zip lining, mountain biking, and whitewater rafting guests might want. 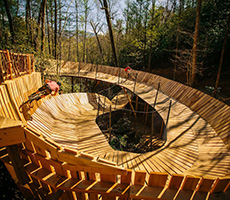 Mountain Biking in the Smoky Mountains

Wagner says the partnership has been beneficial to both companies. “We all know it behooves us to get along and help each other out,” he says. “We sat down and said, ‘OK, we have two different companies, two different pieces of software, different phone numbers.’ We went through the baby steps to figure out how we were going to create a package, and what did we want it to look like.”

To Wagner, teaming up with a rafting company was a no-brainer. The greater challenge, he says, was finding the right partner. CLIMB Works has an excellent review rating online and is ranked number one in the state. Wagner says it was important to partner with a company that also has a n equally stellar reputation.

“What I was looking at is always who’s involved, what’s their safety record, how many customers do they handle in a year, and what are the reviews customers have given them,” says Wagner. “I try to connect with other companies that are equally successful in providing quality service.”

A partnership between two separate businesses has its challenges. Both had to make adjustments to their existing websites, to include the package pricing and deal with logistical challenges of fitting everything in. The companies had to figure out a way to book the packages in a manner that worked for everyone.

For example, afternoons are typically a slower time on the river, so that’s when CLIMB recommends customers go rafting.

Wagner says that in three seasons they’ve ironed out a lot of kinks, like making sure reservations don’t fall through the cracks. Since the two companies use different reservation software, they make a follow-up phone call and/or email each time a package is booked.

“The first year was the most challenging. After that, we had a lot of ideas,” Wagner says. “If, hypothetically, 20 reservations fell through the cracks the first year, both sides scrambled and figured it out. The next year, it may have dropped to 12, because we figured out a better way to tweak it. Each year has gotten progressively better with fine tuning and tweaking on how to communicate.”

Three years in, the partnership is working well. As of August, more than 5,000 zip/raft packages—by far the most popular offering—had been sold for 2016. And overall business at CLIMB Works is up.

But partnerships don’t have to be so formal, or as involved. Take endorsements, for instance. An alpine coaster that opened in the area a few years ago displays CLIMB Works materials at its operation, and CLIMB Works does the same for the coaster. There’s no packaging or logistics involved.

Like CLIMB Works, ACE Adventure Resort in West Virginia’s New River Gorge has expanded into new activities that cater to a tourist-heavy market. ACE began 35 years ago as a whitewater rafting company operating on the New and Gauley rivers. Rafting is still the primary activity, but the company has added various others over the years, and now package deals are the its most lucrative products. 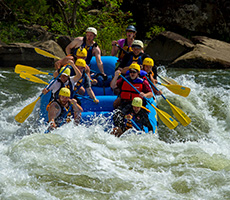 Dropping into Hawaii 5-0 wave of “Lost Paddle”, one of the Upper Gauley’s Class V rapids

“Rafting is our core customer,” says Josh Sapio, ACE’s director of zip, climbing, and paintball. “All the other activities are sort of add-ons to fill in their vacations. We’re a destination place, so people can come to our property and never leave for a week, and do different activities every day.”

A day at the resort might include mountain biking, ropes courses, standup paddleboarding, zipping, and playing around on the five-acre Wonderland Waterpark.

Sapio says all additions were calculated moves based on market trends. For example, in the late ‘90s, ownership saw the ropes course facets of rock climbing start to take off. So ACE hired Alpine Tower to install a ropes course. Likewise, in 2007, ACE installed West Virginia’s first zip tour.

Unlike many other operators, though, ACE has incorporated these activities under its own umbrella rather than partnering with other companies. It houses them on a 1,500-acre campus that’s uniquely suited to accommodate all. Its private beach, for example, has dedicated put-ins and take-outs for its boats. Miles of mountain bike trails and the zip tour follow the rim of the Gorge—a flat mountain vista that’s home to multiple campgrounds and offers suitable terrain for paintball as well. The main base area at the lake includes parking, a dining hall, and a welcome center. 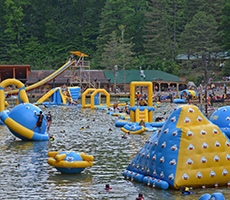 Fun for the whole family at Wonderland Waterpark

Sapio says the company has ironed out kinks, including training reservationists in the intricacies of setting up multiple-activity vacations.

“We’ve found that most people live sort of sedentary lives. When they come on their adventure vacation it just wears them out. So we try not to put too many physical activities in one day,” says Sapio. “A lot of that happens with our reservationists. They’re very good at setting up activities in a way that makes sense, and they have to work through logistical challenges to give the guests what they’re looking for.”

Sapio says that ACE employs about 150 guides and an additional 150 staff members. All training is done in-house, and guides receive different certifications and training based on their jobs.

The company just completed Phase I of its latest zip build, which includes nine pole-based zips and two bridges. Sapio is hoping for further expansion in the near future, with the ultimate goal for Phase II to take the zip tour all the way to the river. This could mean an additional two miles of zig-zagging lines descending 800 vertical feet from the rim of the Gorge to the river below.

Sapio says the company will add new activities as new things come on the market. “Having all these activities keeps the vacation fresh,” he says. “Guests don’t feel like they’re doing the same thing every day, and it gives them a reason to stay longer. We certainly do an incredible amount of business by offering all of these activities.”

Which makes sense when you think about it. Guests want it all: they crave variety, but also the ease of one-stop shopping. Activity packages deliver on both counts. Whether you partner with another nearby business or have it all in-house, packaging multiple activities for one price is a proven strategy that will help the bottom line.