You are at:Home»News»New Netted Adventure Park Opening Outside Montreal
By Katie Brinton on April 29, 2022 News, Park Briefs, Spotlight On..., Uncategorized

The new Upla Adventure Park is opening outside Montreal on June 4. A fully netted attraction, accessible to participants ages 3 to 99, Upla has been billed as the first of its kind in North America.

Upla, which will be open year-round, has two offerings: a netted course and a “Treetop Village.” It is the latest attraction from Arbraska, which owns seven aerial adventure operations around Quebec and Ontario, including several challenge courses, zip lines, treehouse villages, and a via ferrata.

Upla’s main course is made up of a series of suspended nets that hang 20 feet above the ground and link together seven trampolines, including one two-story trampoline, three slides, and one tunnel, all accessed via three ramps. It is entirely enclosed, so no harnesses are needed. 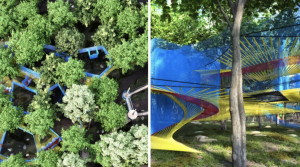 The netted “Treetop Village” is also a harness-free attraction. It includes seven treehouses—two of which are two-story structures—two spiral slides, a secret passage, a lookout point, and two access ramps, all linked together by enclosed suspension bridges.

A tour of the main course is slated to take two hours, and reservations will be required.