Bradd Morse wears many hats. As owner of Canopy Tours, Inc., he consults on construction, design, marketing, and training for adventure parks in far-flung areas, including South Korea, Belize, and Nova Scotia. As the owner/operator of parks in New York and Jamaica, he manages successful operations that employ hundreds. And as an industry veteran of 30 years, Morse has seen changes and growth, both in the industry and his own personal mission.

For Morse, 46, it began simply enough. In the mid-’80s, as a 16-year-old Massachusetts high school student, he apprenticed with park builders, designers, and arborists at Pro Image and Tree Specialists. “I grabbed on as a kid and never left,” says Morse.

Morse was busy in the ’90s: He turned a former conference center into a kids’ adventure park; built a park for military personnel at a Samsung training facility in South Korea; moved to California to work on projects for big-budget films like Cliffhanger and K2. 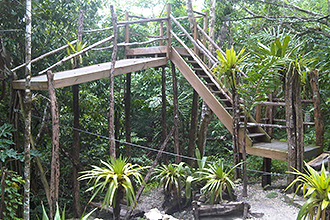 Materials that were cleared for construction in Jamaica were recycled into a zip platform.

In 2007 he found himself in Jamaica, staring down ownership of his own park for the first time. Morse had answered the call of Francis Tulloch, Jamaica’s then-minister of tourism, who had requested he consult about building a park on Tulloch’s property, which already boasted a bamboo rafting operation. Tapping the foreign tourist market seemed like a good idea to Morse, and he opened Jamaica Zipline Adventure Tours, located in Lethe Estates, a private gated farming community 30 minutes southwest of Montego Bay. 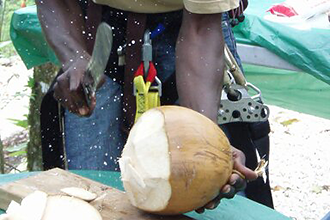 A food tasting is a big part of the eco-tour in Jamaica, and customers receive a sampling of fresh coconut water, sugarcane and pineapple that’s grown on the property.

The park, which has five zip lines running from 250 feet to the 1,600-foot Big Timba, offers views of Jamaica’s hills and the Great River. Every zip line canopy tour features an off-road ride in a six-wheel drive Pinzgauer military transport vehicle, as well as a Flavors of Jamaica Eco-tour. The park caters mainly to tourists from Montego Bay, and Morse coordinates transport for every client as part of offerings.

The affluent tourist-heavy makeup of the park’s clientele offers a stark juxtaposition to its staff, who live in a small rural community, portions of which don’t have power or running water. Morse says the park employs most of the community—about 40 people—in addition to an estimated 50 taxi drivers who are paid to deliver guests from all over the country. It’s this piece of the puzzle that sent him in a different direction.

“I went there to build a business and make money,” says Morse. “In the end, I realized the effect it had on a small community in a remote area. I realized you employ everyone, and it’s a really big responsibility—making sure the business is successful so the community will succeed. It’s a whole other side of the business.”