Being an Economic Engine

Morse says he’s grown to look most closely at the economic development aspect of his parks. It’s helped him be a better businessman, and drove him to pursue another operation in New York’s Catskill Mountains, at Hunter Mountain ski area. He partnered with the resort and opened New York Zipline Adventure Tours in 2009, in another community that needed a boost.

Hunter Mountain sits in the towns of Hunter and Lexington. The ski area is the largest employer in the region, but it’s seasonal and weather-dependent. Morse, interested in applying what he’d learned in Jamaica, applied for—and won—a $400,000 grant from the state’s Economic Development Committee. It came with the stipulation that the money had to be spent on labor.

“We got a grant to build a course there because it was a depressed area,” says Morse. “We far exceeded the goals and made a huge impact on the community. Now there are more than 100 employees in summer, all the hotels are full, restaurants are popular. It worked exactly the way it was supposed to—created jobs and brought revenue to area.”

The effort won Morse a “Best Large Business” award from the local Chamber of Commerce in 2011, as well as kudos from the governor. New York Zipline Adventure Tours is now the second largest employer in the region, following the ski area.

Of course, if you’re going to cater to a destination crowd from New York City and Long Island that drives 2.5 hours each way, you have to keep offerings fresh. “We are very grateful and focus on delivering an amazing experience,” says Morse. “I find it remarkable that these folks are coming up here and paying us to do this. A dad from New York City paying $129 a person times four. Plus lunch, gas, and fuel. He’s gong to spend $700, so it better be good. We pride ourselves on that and make sure we deliver.” 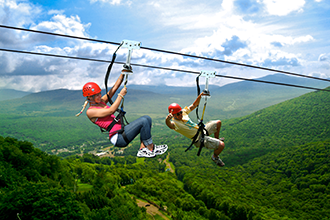 The park offers several zip line canopy tours, including night zipping. Its mainstay Skyrider Zipline Tour begins with a chairlift ride and offers 4.6 miles of cable on side-by-side zips, which descend the mountain at heights as much as 600 feet above the ground. When it was built, it was the largest in North America, and the second largest in the world. 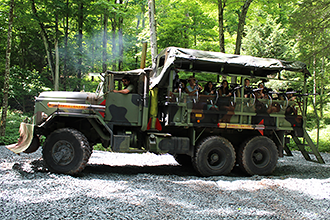 The park added Zombie Hunter Wars to its roster in June. Visitors ride around a “fake town” on military trucks mounted with 16 paintball guns, and the staff is dressed like zombies. “You come save the world, shoot zombies, things happen to you along the way,” says Morse.

This outside-the-box addition has been lucrative in its first season, and the park now offers a Zip and Zombie package. It’s also created another 40 jobs and brought roughly 30,000 people to Hunter.

Morse thinks such growth is vital, especially if you have the right location for it, and a plan. “You’ve got to keep growing,” he says. “I look at the whole picture. Not just what we’re doing today—where are we going next?”

He sees others asking the same question. “I met these wonderful folks in San Francisco, at a place called Dell’Osso Farms,” he says. “They started out with a corn maze, then added pumpkin guns. Then they had me add four zip lines, and then things got crazy. They added a train, then snowmaking in summer, then tubing, then an awesome adventure park. And that’s the model. They killed it. They’re making so much money.”

Morse is following a similar pattern at Hunter. For example, this fall, in addition to Zombies, the zip lines will be “haunted,” with LED lights and more.

He brings this same level of innovation as a consultant to parks around the world. Morse is currently working with a resort in China, Crosswaters Mountain Experience at the Crosswaters Eco Lodge in the Guangdong Province, on construction of a three- to-five kilometer platformed TreeWalk with zip lines. At the same time, he’ll be concentrating on his own two parks, and possibly adding others to the mix, while focusing on the economic development piece.

“People just don’t think about the impact they can have, it’s really positive,” says Morse. “We don’t produce anything, or make any waste. It’s amazing the impact we can have on a community. We basically make them happy.”