Boredom is a great motivator. In 2005, Jamie Johnson was on a dead-end journey into the heart of tedium, toiling at a desk job for a toy company in New Jersey. For a guy with a passion for outdoor activities—camping, hiking, kayaking—it was a form of imprisonment. So he quit and moved north to the Lake George area of New York, to live the active life that inspired him.

But hiking, camping, and paddling don’t pay the bills. He needed work, although not some deadly desk-bound regime. He wanted something that would dovetail with his outdoor interests. Inspiration came from a visit to Brazil, where he saw a ropes-course-style installation for kids in a shopping mall. It wasn’t quite like anything he had seen before. A light went on in his head: Why not create a similar ropes-course activity for adults back in the great outdoors of upstate New York? 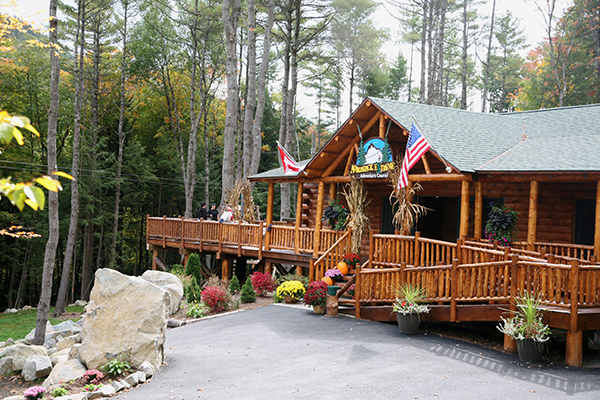 The welcome center at Adirondack Extreme

With the help of his father Dave in securing initial financing, Jamie bought 18 acres and joined forces with Treego, a Canadian company that had already built, in Quebec, the kind of course Johnson envisioned. The concept, essentially, was a series of ropes-course challenges—suspended logs, suspension bridges, rope ladders, zip lines, and others—linked sequentially.

Together, Treego and Johnson created four adult courses and a kids course for an initial investment of $400,000, along with a $180,000 welcome center. Thus was born what Johnson calls “the first European-style pay-for-play course in the U.S.,” and he called it Adirondack Extreme.

Could something that worked for kids in a mall in Brazil work for adults in the Adirondack hills? As the saying goes in real estate, location is everything. The Lake George region is a popular tourist area in the summer months, and Adirondack Extreme was particularly well positioned to take advantage of that tourist traffic. The 190-room Sagamore Resort, a Lake George institution, was just a 10-minute drive away, with several other lodging establishments also nearby.

Not that there weren’t initial hurdles to clear or skeptics to convince. Johnson and his team might have been full of enthusiasm, but they were embarking on a venture entirely new even to them. “We were pretty wet behind the ears,” he says. “We had never even swiped a card in a credit-card machine.”

The party from whom Johnson bought the land wanted to be able to buy the 18 acres back when the business failed, says Johnson. The land seller’s thinking: What crazy people would want to be swinging around unsteadily on suspending bridges, ropes, trapezes, and other balance-testing challenges 50 feet up in the trees? Surely this was a business destined for failure. And not surprisingly, insurance was initially hard to come by. “Local carriers said, ‘Are you guys nuts?’ Nobody knew what an aerial adventure park was,” says Johnson, before finding coverage with Hibbs Hallmark through the ACCT.

Permitting and safety inspection, however, were not a problem. Local authorities were quick to give the fledgling park the thumbs up, and while the New York State Department of Labor now inspects the zip lines, other state authorities have pretty much stayed on the sidelines. Adirondack Extreme relies privately on Treego for annual inspections and maintenance.

The most important people Johnson needed to woo, of course, were park visitors. They had to be convinced to try an unfamiliar activity in a tourist region already offering a large menu of outdoor and family activities. For the first year of operation, Johnson set an ambitious target of 12,000 visitors. While he came up short, the 8,500 people who did “pay for play” that first season represented a more than respectable number. 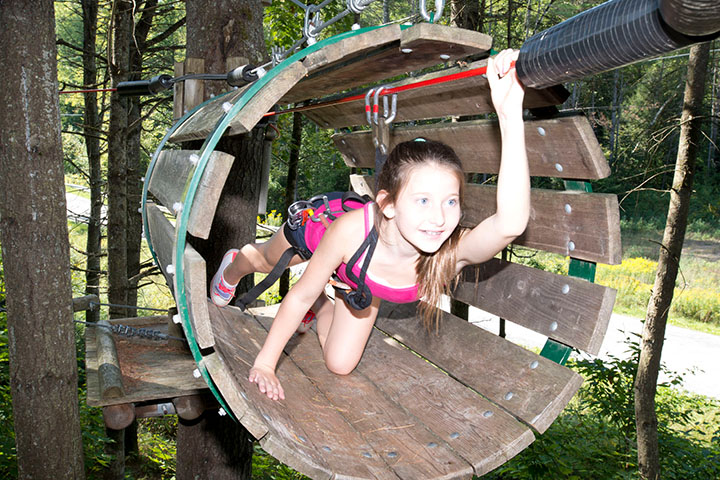 The park built its early marketing campaign around a printed brochure, but “the brochure really didn’t do it justice,” Johnson says. “We needed a visual.” So Johnson and his team created a TV commercial broadcast locally in the Albany area. With that, a strong internet presence, and word of mouth, numbers began to grow. By season two, visitor attendance had jumped to 22,000, on its way to an average now of 33,000 to 35,000 annual visitors. Not bad for a park that is open for just six months of the year.

Johnson estimates that it took about four years to recoup the initial investment. But along the way, he employed a sensible expansion strategy; “every year, we added to or improved the park,” Johnson says. Those costs were tacked on to the initial investment, of course, but, it made good business sense to be able to offer something fresh and new to the many visitors who return to the region summer after summer. With the initial installation and subsequent add-ons, Johnson figures it wasn’t until the park’s tenth season that, financially, “we were free and clear.”

So what’s the attraction? It is safe to say that every adventure park has its own unique assets, and according to Johnson, TripAdvisor posts regularly cite the beauty of the forest and the brook that runs through the property. But personal challenge is probably Adirondack Extreme’s central raison d’etre. The park now consists of six adult courses that step up in difficulty, along with two kids courses. The idea, effectively, is to continue upping the challenge to the point of failure. “It’s not a cookies-and-cream adventure,” Johnson says.

Anyone who completes all six courses earns a park t-shirt, but Johnson estimates that less than 30 percent of first-timers accomplish the feat. In fact, says Johnson, “part of the experience is to get rescued,” with two guides per course stationed strategically to enable them to assist visitors unable to complete a particular challenge.

That kind of activity, promoting personal growth and team building, can have great appeal for the corporate outings and school groups who represent a decent chunk of Adirondack Extreme’s shoulder-season business in spring and fall. Still, the heart of summer, July and August, when the tourist season is in full swing, produces the lion’s share of the park’s annual revenue.

So what’s next? In ten years of operation, Adirondack Extreme might have arrived at a plateau. After numerous additions and improvements, room for growth has diminished. Annual visitor numbers are healthy and high but unlikely to go significantly higher. All expenses have been paid, and business is good—a nice combination.

To expand his horizons, Johnson is looking beyond the borders of Adirondack Extreme. In coordination with Treego, Johnson joined with is father in creating the park-building company, Outplay Adventures, in 2010. Outplay, for which Dave is president, currently has eight parks (including Adirondack Extreme) in its portfolio, and the Johnsons are looking at opportunities to manage other parks, either as owner or in a partnership, in places like Oregon and Idaho.

Jamie is moving cautiously, however. “The more you grow, the more problems and issues arise,” he says. He is currently engaged in a partnership in the management of Tree to Tree Adventure Park in Cape May, New Jersey. That kind of absentee relationship, he says, “can be nerve-wracking at times” when you are relying on someone else on-site to be in charge.

Nevertheless, Johnson sees room to grow in his future. In 10 years, he says, he envisions having an ownership or managerial role in five to eight parks. That will mean, of course, a giant assortment of new challenges, but Johnson has already shown a willingness to venture into the unknown. He founded a successful business in Adirondack Extreme with no template to guide him. His only guiding force was a deep-seeded need to escape boredom.