A few years ago, Killington Resort in Vermont decided that the lazy, hazy days of summer were just a bit too lazy. The resort’s summer business, mostly based on scenic lift rides, golf, hiking, and mountain biking, was lackluster. More to the point: it was failing to generate sufficient revenues to satisfy the resort’s management and its owner, POWDR. 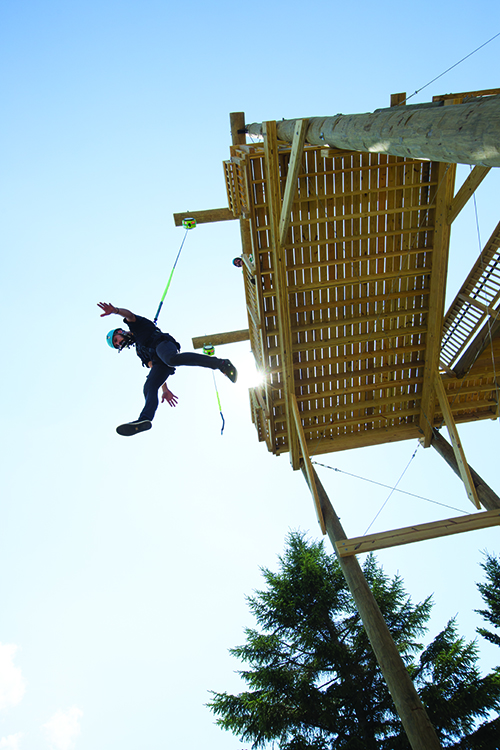 So Killington did what mountain resorts everywhere love to do: It redeveloped its master plan. Snowsports remained the resort’s number-one revenue generator, supplemented by summer activities. Says Killington spokesperson Michael Joseph: “We had the goal of bringing in more and new guests during the summer months, increasing summer lodging stays, and diversifying our revenue streams.”

A variety of factors went into determining which activities made the final cut, among them cost, space, popularity, ease of installation, revenue potential, and compatibility with the natural aesthetics of the mountain environment. What the resort wanted to offer, says Joseph, was “a diverse set of activities available for guests of all ages and adrenaline levels.”

The five-year plan was set in motion in the summer of 2014. It retained the existing revenue-generating activities, like scenic lift rides and mountain biking. In fact, the resort has gone all-in on its mountain biking program, treating it as one of the centerpieces of its warm-season attractions. Killington contracted Whistler-based bike-park designer Gravity Logic to create a plan for enhancing existing trails and adding new terrain for riders of all abilities. 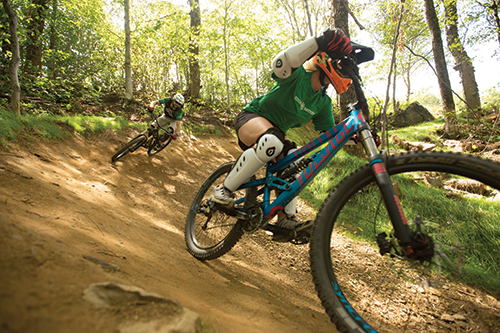 Killington partnered with Gravity Logic to enhance and expand its Mountain Bike Park, building terrain for all abilities.

Gravity Logic’s plan was spread out over five years, beginning in 2014 with the construction of beginner/intermediate bike trails at Snowshed (one of the resort’s several base areas), which serves as an overall base for summer activities. Last summer, crews completed one of the more ambitious phases of the plan by adding six new trails, a pump track, a skills area, and a kids’ strider bike park. This phase alone was a $375,000 investment. The resort has also added more than 100 new rental bikes to its fleet since it began the program’s expansion.

The payoff was quick and substantial. In the first three years of the mountain-bike expansion, park visitation tripled, and Killington is expecting another 30-percent increase this summer.

But expanded mountain-bike offerings were, of course, just one piece of a much larger summer expansion plan. In 2015 alone, the resort invested $3.5 million in summer activities. The most significant piece of this investment was the 4,800-foot-long Beast Mountain Coaster, which came with a $2.1 million price tag, making it the most expensive of the many summertime additions. But it met the master-plan objective of offering an adrenal thrill for all ages. Anyone of any age could do it and get a heady rush of excitement. In addition, at $16 per ride, it could be a substantial revenue generator. 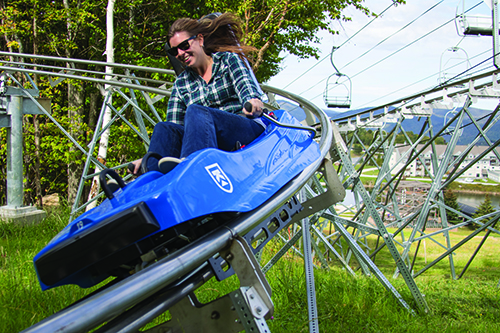 On the other side of the expense coin were water-based activities at Snowshed Pond. An investment in a fleet of rental kayaks and stand-up paddleboards was pretty much all that was required, along with personnel to man the rental concession.

The summer of 2015 also saw the additions of an aerial adventure park, maze, aerial ride, ATV/UTV tours, Segway tours, and a simulated mining sluice. For summer 2016, Killington added a dual zip line, Euro bungee, and 40-foot free-fall tower. In the fourth year of the five-year plan, most of the work is done; now it’s a matter of “refining our offerings and services,” says Joseph.

If You Build It…

Of course, building summer activities is just half of the equation. Getting visitors to come is the other critical half.

In that respect, Killington is somewhat unusual for Vermont, where major ski resorts are typically affiliated with nearby towns—e.g., Stowe Mountain Resort and Stowe, Okemo and Ludlow, Sugarbush and Warren/Waitsfield—that act as hubs for summer activity. The town of Killington is more diffuse, with no real social or economic nucleus. Businesses are relatively spread-out, mainly along the four-mile access road to the resort base, and the economy in the past has been overwhelmingly based on winter tourism. While local lodges and restaurants might do gangbusters business between November and April, non-skiing visitation would drop so precipitously that many local establishments simply shuttered once skiers were gone. 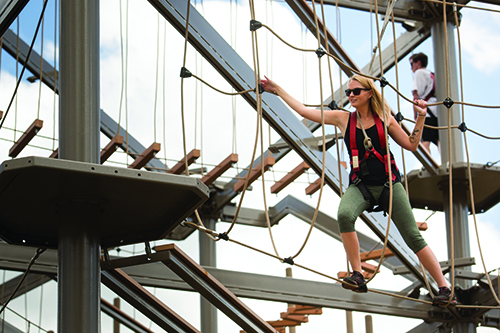 But these businesses are working to complement Killington’s own promotional efforts. According to Joseph, the Killington Pico Area Association, a de facto chamber of commerce, is boosting summer visitation by sponsoring and promoting events. A concert series and the Race to the Peak 5k running race are among the events that have not only attracted visitors, but also served as promotional touchstones in establishing the area’s summer viability.

The Town of Killington is the principal sponsor of the Killington Stage Race cycling event over Memorial Day weekend, when skiing (usually) is experiencing its last-gasp. The race makes a symbolic connection in the transition from an active winter to an active summer.

The resort, for its part, hosts other events, such as a Spartan race and Eastern States Cup mountain bike races. These events not only bolster the summer event calendar, but they also attract a critical mass of people who often stick around to enjoy the resort’s many other activities. In addition, it has chipped in with a mix of promotional endeavors: traditional advertising, a strong social media presence, and brochure distribution to local lodging establishments. Joseph did not offer specific summer revenue or visitation numbers to measure the expansion’s success, but says that revenues so far have met expectations.

A few things are instructive about the way Killington proceeded with its expansion. For starters, it did its research before leaping into the development breach, consulting experts in the field (at the SAM and industry events) and observing what other resorts were doing. When it came to implementing its master plan, it wasn’t afraid to again seek the input of people in the know. For example, Killington already had experience as a mountain-biking operator, but still sought the guidance of a professional trail designer. 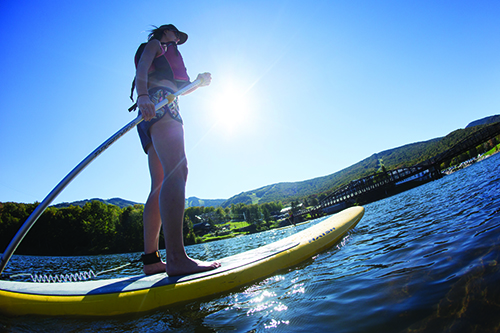 Water-based facilities at Killington include a stand-up paddleboard and kayak rentals on Snowshed pond.

The resort coordinated with the local business community in promoting summer, realizing, as Killington VP of sales and marketing Rob Megnin says, “a rising tide floats all ships.” Joining forces made immense sense; many local businesses were stakeholders in the resort’s summer success.

Finally, it found a way of retaining key personnel on a year-round basis, rather than seeing a seasonal exodus. Not only were employees held over to run and supervise the various new activities, increased summer visitation necessitated more help in food services, such as at the Peak Lodge at the Killington summit, and in lift operations, with more lifts running to provide access to the various activities.

What Killington has done, of course, is not unique. Almost every ski resort in North America has spent at least the last decade seeking ways of increasing non-winter (non-skiing) revenue. But Killington stands out because it came up with a well-conceived, broadly inclusive plan and stuck with it. Where many other resorts have dabbled in summer activities or have added piecemeal to existing summer programs, Killington knew exactly where it was going before a single shovel struck ground. The lazy days of summer at Killington are over.

Killington will be host to the SAM, our sister publication, Summer Ops Camp, a hands-on business seminar, Sept. 5-7. Learn more at www.summeropscamp.com